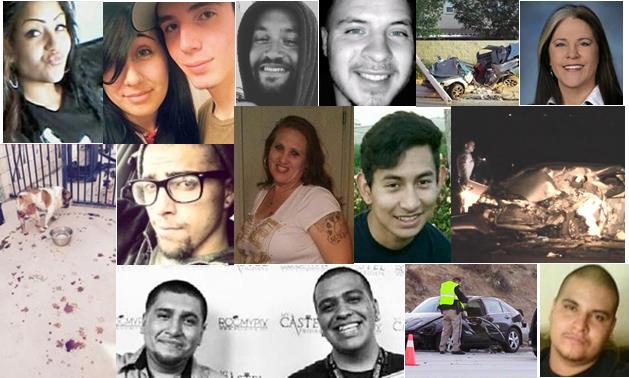 10. Girl shot and killed in Lancaster

On Friday, March 27, 2015, 18-year-old Rosario “Rosie” Cruz was shot while visiting friends at a mobile home park in Lancaster. Homicide detectives said the girl apparently got caught in the crossfire when a shooting broke out between groups of Hispanic men. Rosie was rushed to an area hospital, where she was pronounced dead.

Homicide detectives have released few details since the fatal shooting, and the crime remains unsolved.

On Wednesday, Nov. 18, 2015, Zachary Swensen, his fiancee London Ortiz-Stodgell, and Michael Cole died after the motorcycles they were on collided in Palmdale.

The crash, which also involved a Toyota SUV, happened on 10th Street West near the intersection of Avenue N-8, authorities said.

Swensen and Ortiz-Stodgell, both 21-year-old Lancaster residents, were pronounced dead at the scene. Cole, a 32-year-old Rosamond resident, was transported to the hospital where he was later pronounced dead.

The three crash victims were members of a local motorcycle club, and more than 200 people mourned their deaths at a vigil held at the crash site. Our initial story on the incident was the 9th most-viewed story in 2015. Read it here.

On Sunday, June 28, 2015, 21-year-old Lancaster resident Kristian Campos lost control of his Honda Accord and crashed into a utility pole on 20th Street East, south of Avenue I, in Lancaster.

The pole was knocked over and live wires prevented firefighters from removing Campos from his car until Southern California Edison workers arrived to cut power to the wires and take the pole off the car, sheriff’s officials said.

Campos was pronounced dead at the scene.

The fatal single-vehicle collision was our 8th most-viewed story in 2015. Read it here.

It’s been more than a year since Palmdale School District’s assistant superintendent, Pauline Winbush, pleaded not guilty to dog fighting, animal cruelty and child abuse. Still, our Dec. 30, 2014 story on the incident was our 7th most-viewed story in 2015. Read it here.

On Jan. 29, 2015, Winbush and her boyfriend, Kevin Ray Williams, were ordered to stand trial on 17 felony counts of cruelty to an animal, four felony counts of dogfighting, one felony count of child abuse, and seven Los Angeles County code violations, including unsanitary conditions and failing to license and vaccinate the dogs.

Winbush was fired from the Palmdale School District in February of 2015. She remains out of custody on bail as she awaits trial.

On Feb. 9, 2015, TheAVTimes.com published a reader’s letter about Mission Animal Hospital. In the letter, Lancaster resident Linda Monson-Cianciosi claimed the Palmdale pet hospital removed her bulldog’s genitalia and then sent the dog home, covered in blood, with no aftercare instructions. The story sparked community outrage, and residents organized a protest in front of the hospital in support of “Max” the English bulldog.

Monson-Cianciosi is now pursuing legal action against Mission Animal Hospital, and she has a court date on Jan. 4, 2016, at the Antelope Valley courthouse, according to an update she sent to us via email.

Monson-Cianciosi’s letter was our 6th most-viewed story in 2015. Read it here.

5. Man shot and killed in Lancaster, suspects in custody

On Tuesday, May 19, 2015, 22-year-old Aaron Brockway was shot at a residence in the 44000 block of Canyon Way in Lancaster. Brockway was transported to the hospital in critical condition, and he was pronounced dead that night.

Two men spotted near the scene were detained and later arrested in connection with Brockway’s murder.

Our initial story on the incident was the 5th most-viewed story in 2015. Read it here.

Padilla’s Honda crossed all northbound lanes and then overturned numerous times, according to the California Highway Patrol.

Padilla was ejected from the overturning vehicle and then struck by a big rig and another vehicle. He was pronounced dead at the scene.

The fatal collision was our 4th most-viewed story in 2015. Read it here.

On Monday, June 15, 2015, 18-year-old Daniel Colato was killed in a collision with a suspected drunken driver in Palmdale. Colato was driving a 2004 Honda Accord southbound on 30th Street East when a northbound 2005 Ford F-350 pickup truck allegedly crossed into the southbound lane, causing the head-on collision, according to the California Highway Patrol.

The pickup truck’s driver, 36-year-old Galo Nelson Campana of Palmdale, was charged with murder, gross vehicular manslaughter while intoxicated, driving under the influence of an alcoholic beverage causing injury and driving with a .08% blood alcohol content causing injury, according to court records.

Our initial story on the incident was the 3rd most-viewed story in 2015. Read it here.

During the early morning hours of Friday, Feb. 27, 2015, Palmdale residents Alexander Alvarez and Michael Zavala, both 21, were killed in a single-vehicle crash on Sierra Highway, south of Pearblossom Highway.

Both men were passengers in a 2009 Honda driven by 22-year-old Palmdale resident William Navarro, who dozed off at the wheel, according to the California Highway Patrol.

Nineteen-year-old Stephanie Estrada, who was sitting in the left back seat, was injured in the collision.

The fatal collision was our 2nd most-viewed story in 2015. Read it here.

TheAVTimes.com published a story on Jan. 9, 2015, after learning that the body of 12-year-old Everardo Simental Jr. was still at the county morgue, nearly seven weeks after he died in a traffic collision.

The boy’s mother, Heidi Velasquez, was accused of pocketing donations and then lying to friends and family about her son’s burial.

Velasquez denied the allegations but refused to elaborate, saying it was a family matter.

Residents created the now-defunct “Justice for Junior” Facebook page aimed at exposing Velasquez and helping to bury the 12-year-old boy, who was known as Junior to his friends and family.

Junior’s paternal family members stepped in and said they were communicating with Velasquez and the coroner’s office to get the boy’s remains to Mexico to be buried alongside his father. It was our most-viewed story in 2015. Read it here.