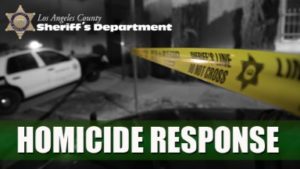 PALMDALE – A man struck by a vehicle and pinned against a home in Palmdale Thursday later died at a hospital, and authorities are searching for a suspect seen fleeing the scene.

It happened around 4:10 p.m. Thursday, Jan. 24, on the 38500 block of 35th Street East. Deputies responded to an assault with a deadly weapon call and found the victim who had been struck and pinned against a residence by a champagne-colored SUV, according to a news release from the Sheriff’s Information Bureau.

The suspect fled the location northbound on 35th Street and out of view, the news release states. No suspect description was immediately available.

The victim was taken to a hospital where he was pronounced dead. His name has not yet been released pending next of kin notification.

Editor’s note: An earlier version of this story was revised to correct some inaccuracies. The suspect did not run away, but actually fled the scene in the SUV. The suspect and victim has been identified. Read an update to this story here.