PALMDALE – Investigators are seeking the public’s help to find a man suspected of using an SUV to strike and pin his girlfriend’s brother against a home, fatally injuring him.

The suspect, 25-year-old Esteban Reyes-Rojas, fled the scene after the deadly collision, which happened around 4:10 p.m. Thursday, Jan. 24, in the 38500 block of 35th Street East in Palmdale, according to a news release by the Sheriff’s Information Bureau.

The victim was identified as Everardo Castro. His family said he was 26.

The attacked stemmed from an argument between Reyes-Rojas, his girlfriend and Castro, her brother.

“Suspect Esteban Reyes-Rojas got in his vehicle, chased down the two victims. The girlfriend sustained minor and non-life- threatening injuries,” the news release states.

Castro was taken to a hospital, where he died from his injuries. Reyes-Rojas fled the scene in his tan 2002 Chevrolet Tahoe, California license plate number 7WPT016, according to the news release.

He is known to frequent the Palmdale, Lancaster and Santa Ana areas.

Anyone with information about the incident is encouraged to call the Sheriff’s Homicide Bureau at 323-890-5500. Anonymous tips can be submitted through Crime Stoppers at 800-222- TIPS (8477) or lacrimestoppers.org. 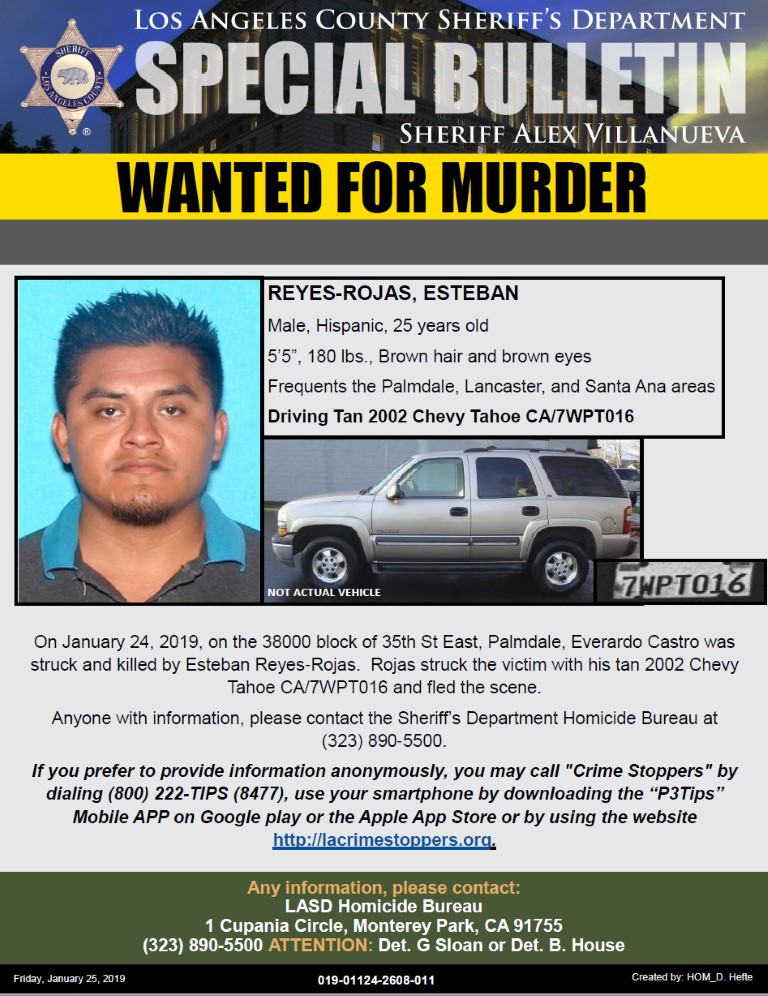 26 comments for "Man wanted for striking, killing victim with SUV in Palmdale"