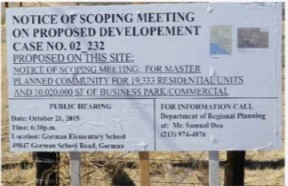 LOS ANGELES – The county Board of Supervisors Tuesday tentatively approved a 19,333-home Tejon Ranch development in the Antelope Valley — subject to a local jobs contract and review of fire mitigation strategies — despite critics who claim it will damage sensitive habitats and present a fire danger for its residents.

The vote was 4-1 with Supervisor Sheila Kuehl dissenting, saying the project was saddled with too many concerns and expressing skepticism about the developer’s promises about jobs and the availability of affordable housing.

The long-planned Centennial project is sited on roughly 12,300 acres of a more than 270,000-acre expanse of land owned by the Tejon Ranch Co. The land is considered the largest contiguous piece of private property in California held by a single owner.

The project will include not only housing, but also 10 million square feet of commercial space, schools, fire stations, a police station and a library, to be built in phases over 20 years. Tejon Ranch has committed to build fire and police stations and other public infrastructure at no cost to county taxpayers to create what its describes as a self-sustaining community.

Nearly half of the development site’s acreage will be preserved as open space. That’s in addition to a 2008 agreement struck between Tejon Ranch Co. and a coalition of environmentalists — including the Natural Resources Defense Council, National Audubon Society and Sierra Club — under which the developer agreed to permanently conserve 90 percent of its land in exchange for the right to develop the balance.

At the board hearing, a procession of opponents spoke out about environmental concerns, echoing issues raised during an August meeting of the county’s Regional Planning Commission. Some called the idea of a master-planned community of such magnitude a relic from the past — despite the housing shortage in the county.

Centennial is “classic sprawl, a textbook example of what … not to do,” project opponent Tim Martinez told the board, pushing back against the idea that the development would ease the county’s housing crisis. “Are homeless people going to be able to take on a mortgage for a $500,000 house? It’s not going to solve homelessness.”

Supervisor Kathryn Barger, who represents the Fifth District where the project is located, said scale is critical since new housing construction statewide has slowed to less than half the rate needed to meet demand.

“Some may consider this project too big,” Barger said. “(But) we have an obligation to improve conditions for our constituents and alleviate the housing crisis.”

The project developers had committed 15 percent of the units to be affordable — up from an initial proposal of 10 percent after negotiations with the Regional Planning Commission — although the exact mix of low- and moderate- income units has not been finalized.

Supervisor Hilda Solis made a last-minute push for another 5 percent increase.

“Folks are looking for some relief,” Solis said, telling her colleagues she thought 20 percent would be more “robust.”

The developer said increasing the number of affordable units by another 5 percent would up the cost of the remaining market rate units by $25,000 each.

Barger ultimately agreed to compromise by holding the developer to 18 percent affordable housing.

Tejon Ranch Co. has also agreed in principle to create supportive housing for the homeless within the planned community, but the ratio of such housing is still being debated.

Labor leaders and tradespeople showed up in force to support the project, which Tejon Ranch Co. has presented as an economic win the for the county, predicting it will create more than 20,000 permanent jobs, roughly 25,000 construction jobs and a $31 million annual public revenue surplus for the county.

The Center for Biological Diversity and others argued the project would destroy grasslands and habitat for rare plants and animals and contribute to air pollution by generating more than 75,000 new vehicle trips a day as drivers commute into Los Angeles. Once lost, that wilderness can never be restored, they told the board.

“Nothing compares to the jaw-dropping wonder and biological diversity of Tejon and the adjacent Gorman Hills, which have been compared to Yosemite Valley for the world-class scenery not seen anywhere else on the planet,” said professional photographer Richard Dickey.

Tejon Ranch’s vice president of community development, Greg Medeiros, said the company had identified the highest quality habitat areas on the ranch and protected them under the 2008 conservation agreement. He and other executives said Centennial would be an environmentally friendly community that will conserve water and energy.

Barger said the developer has gone above and beyond “to make their project as good as it can be based on public input from both sides” and concluded, “I believe that this project does strike a balance that will support generations to come.”

In order to mitigate concerns over air pollution, the project includes measures to promote electric vehicles and complies with per-capita greenhouse gas emissions for the state’s 2030 and 2050 targets.

Perhaps the most timely objection by opponents was that the project will put residents at risk because the site is located in a severe fire hazard zone with no natural water supply.

“What could you possibly be thinking?” one resident asked. “(This) flies in the face of everything we should be doing to fight climate change.”

Los Angeles County Fire Chief Daryl Osby said his team’s initial review of the project focused on the ability to get in and out of the proposed community easily, a sufficient water supply, the appropriate number of fire stations and making sure all vegetation would not only be set back from structures but that new landscaping would be non-flammable. As far as construction, the building materials will be non-flammable, according to the fire chief.

Barger asked Osby how he felt about the site’s fire safety.

“As the fire chief, I am extremely confident and comfortable. We are planning this community from inception,” Osby said, who added that his department was coordinating with state agencies.

“I think there’s been an enormous number of things wrong with this project,” Kuehl said, who acknowledged that devastation in her district from the Woolsey Fire had caused her to look harder at the project. “It’s the aggregate of these issues that convinces me that it’s a bad idea.”

Kuehl said proponents were taking what they were told about jobs and affordable housing on faith, but she was skeptical about whether good-paying permanent jobs would ever materialize in the community or whether the housing would ever be affordable for middle-class teachers and police officers.

County counsel will draft the necessary project documents for a future procedural vote by the board.