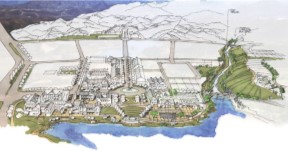 LOS ANGELES – The Center for Biological Diversity filed a lawsuit Tuesday against Los Angeles County planners for allegedly failing to release records related to a plan to develop a roughly 12,300-acre site in the northwest Antelope Valley.

The Tejon Ranch Co.’s Centennial development is a mixed-use project encompassing 19,333 residential units — including 10 percent affordable units – – and about 10 million square feet of commercial space on a site north and east of State Route 138 and the Golden State (5) Freeway.

The Los Angeles County’s Regional Planning Commission approved the plan on a 4-1 vote in August. It has yet to be approved by the Board of Supervisors.

A lawyer for Center for Biological Diversity accused county planners of being unduly influenced by Tejon and called the environmental review process inadequate.

“County residents have a right to an informed, transparent review process for land-use decisions that will harm our environment and quality of life,” attorney J.P. Rose said. “How can the Board of Supervisors make an informed decision when planning officials didn’t even take a look at alternatives to the developer’s proposal?”

The lawsuit seeks all records of communications between the developer and county staffers, consultants and attorneys, including emails, correspondence and text messages.

The Tejon Ranch Co. bills the development as a “sustainable” community that conserves water and energy, maximizes open space and encourages walking and biking over cars. The project includes schools, fire stations, a police station and a library and just around half the acreage is to be preserved as open space.

The Center for Biological Diversity, a national, nonprofit conservation organization dedicated to the protection of endangered species and wild places, contends the planned development would add 75,000 new vehicle trips, destroy a large part of Antelope Valley’s wildflower fields and eliminate habitat for the San Joaquin kit fox and California condor.

The land is also in a high-risk fire zone, leading to charges that the project poses a safety risk, though the developer has said a new fire station — built without taxpayer money — would change that designation.

According to the developer, the project — to be built in phases over 20 years — would create 19,000 permanent jobs, 25,000 construction jobs and generate $31 million in annual county revenue.

Tejon Ranch controls a total of 270,000 acres and reached an agreement a decade ago with a coalition of environmentalists, including the Natural Resources Defense Council, the Sierra Club and Audubon California, to set aside 90 percent of the land in exchange for the right to built three urban centers without opposition.