PALMDALE – Authorities Wednesday named a person of interest in the killings of three family members found dead inside a home in Palmdale, each with traumatic injuries in a case investigators are calling a triple homicide.

No information has been released on what may have led to the killings, but 54-year-old James “Todd” Brown “was living on the property for at least one or two years,” according to a news release Sheriff’s Information Bureau.

A family member asked for a welfare check of the home and upon entering the residence, deputies found the body of a man, then two more victims in another room, according to the Sheriff’s Information Bureau.

“Detectives believe Mr. Brown may have information regarding the murders,” the sheriff’s news release states. 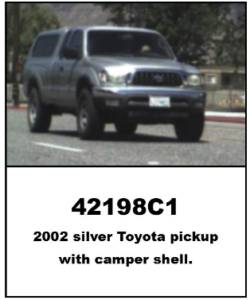 Also being sought is Brown’s silver 2002 Toyota pickup truck with a camper shell and the California license plate 42198C1.

“Detectives have confirmed the vehicle is registered to Mr. Brown,” the sheriff’s news release states. “Neighbors, family and friends have informed detectives that it is the vehicle Mr. Brown typically drives.”

Brown has family members and friends who live in the Inland Empire and Antelope Valley, according to the sheriff’s department.

Anyone with information that could help investigators locate Brown is urged to call the Sheriff’s Homicide Bureau at 323-890-5500 to speak with Sgt. Eric Arias or Detective Gail Durham.

5 comments for "“Person of Interest” sought in Palmdale triple homicide"