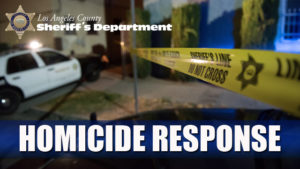 PALMDALE – Authorities have released the names of three family members found dead inside a home in Palmdale, each with traumatic injuries in a case investigators are calling a triple homicide.

A family member asked for a welfare check of the home and upon entering the residence, deputies found the body of a man, then two more victims in another room, according to the Sheriff’s Information Bureau.

“Investigators are still processing the scene and following up on information related to a possible suspect on the case,” the sheriff’s news release states.

No information has been released on what may have led to the killings or about a possible suspect.

No additional information is being released at this time. Anyone with information about this incident is encouraged to contact the Los Angeles County Sheriff’s Department’s Homicide Bureau at 323-890-5500. To remain, anonymous, call Crime Stoppers at 800-222-TIPS [8477].