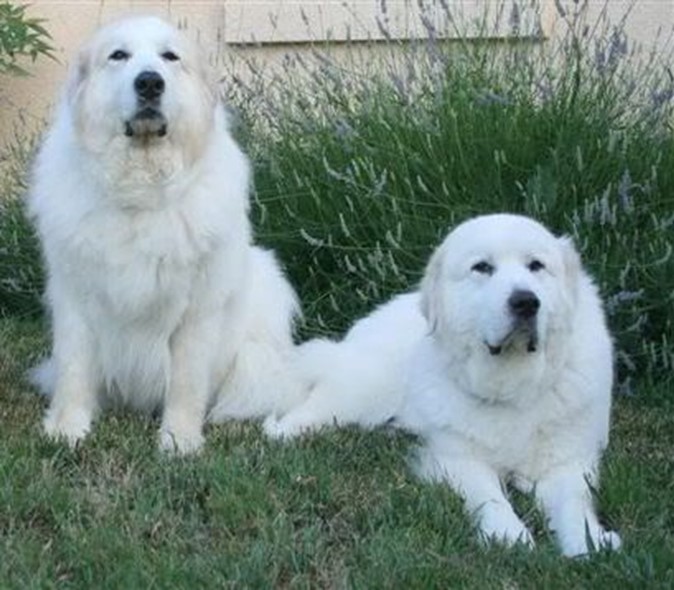 In my early twenties I worked on a sheep farm in southern Illinois. The farm had about 1,000 sheep and two Great Pyrenees dogs to protect them. Great Pyrenees dogs are a type of dog known as a livestock guardian dog (LGD); they do not herd the sheep like border collies but are there instead to protect the sheep from predators. They are giant, white (mostly), hairy dogs that blend in well with the flocks.

The Pyrs, as the breed is affectionately known, slept all day in the barn when humans were about and there was no danger present to the sheep. However, all night long they patrolled the farm, regularly barking to let any coyotes or roaming farm dogs know that they were on duty and a force to be reckoned with. Pyrs have a deep, booming bark that denotes authority and the ability to back it up. We never lost a single sheep thanks to these dogs.

However, they often chose to broadcast their presence in the middle of the night right outside my bedroom window. I really don’t recall ever getting a good night’s sleep during my time on the farm. I remember laying awake thinking, “These are super sweet dogs and I really love them, but who would EVER have one as a pet?”

Fast forward many years. We had just lost our beloved Newfoundland, and my husband suggested we get a Great Pyrenees because that breed would be more protective of our home. All I remembered at the time about my experience with the Pyrs was how sweet, loving, and gentle they were and happily agreed. Off we went to Great Pyrenees Association of Southern California, an animal rescue and adoption organization that specializes in Pyrs. We brought home our new Pyr, Sebastian, who immediately began patrolling our back yard and loudly let the neighborhood know he was on duty. I had forgotten about the barking! Nevertheless, we loved him dearly and have become devoted fans of the breed; we have had four more rescued Pyrs after Sebastian. They have all been barkers and devoted protectors of our home, even stopping two attempted burglaries.

However, there are differences between them. Sebastain hated going out in the rain but didn’t mind loud noises. Isabella would stand in the rain for as long as we would let her but was terrified if there was thunder or lightning. Holly is shy around strangers, but the others eagerly make new friends. Dino has a deep suspicion of anything on wheels – skateboards, bicycles, shopping carts – but others ignore them. Freya hides her toys under seat cushions while the rest leave them scattered around the house.

Still, they all share the Pyr behavioral traits of independence, willfulness, and protectiveness. These were behaviors required of an LGD, which was bred to be left alone with the sheep to defend them against wolves, and not rely excessively on human companionship. This independent behavior also means that none of our dogs are going to win any obedience competitions. I have given up on expecting them to respond like our Golden Retriever Rebecca, for whom my wish is her command.

The similarities and differences between our five Pyrs came to mind when I read a recent study published in the journal Science that suggests that a dog’s breed has less influence on individual behavior than people believe. This study collected DNA and owner reports on their dogs’ behavior with the intent to explore how genetics shapes complex behavioral traits. The study suggests that relying on breed as a determinant of a dog’s behavior is not as reliable as many people might believe.

The authors reported that some traits, like biddability (responsiveness to direction and commands) are more linked to certain breeds such as Border Collies, and sociability is heavily linked to Golden Retrievers, but other less heritable traits like agnostic threshold (how easily a dog is provoked by frightening stimuli) are less reliable. The researchers reported, “Behavioral factors show high variability within breeds, suggesting that although breed may affect the likelihood of a particular behavior to occur, breed alone is not, contrary to popular belief, informative enough to predict an individual’s disposition.” The study reported this is even more so for mixed breed dogs.

The American Kennel Club (AKC) responded to the study’s findings by citing a 2019 study published in The Royal Society’s Proceedings B biological research journal. That study evaluated more than 14,000 dogs from 101 specific breeds. This study found that, “Breed differences in behavior covary strongly with relatedness between breeds, and for several traits, genotype accounts for more than 50% of the behavioral variation across breeds—up to 25× higher than heritability estimates from genetic studies within breeds.”

The AKC stated, “The AKC’s position that breed and type of dog does inform about general and instinctual behavior and is the reason owners should consider behavioral tendencies before selecting a breed to make an educated and informed decision that leads to a happy and life-long commitment to the dog.”

This is an important consideration for dog parents or people deciding on what breed (or mix thereof) of dog they might like to add to their family. It is especially important in the field of animal welfare as we see the negative consequences of mismatched dogs and families. New dog owners may obtain dogs unaware of that breed’s propensities, or experience disappointment if their new dog did not meet their expectations of how it should behave because of its breed. These disappointments can result in rehoming the dog rather than accepting their behaviors and keeping the dog in the family.

DACC uses its knowledge of breed propensities to help guide adopters in selecting a suitable dog to add to their family. An adopter looking for a couch potato to hang out with that is captivated by a Siberian Husky’s blue eyes and striking appearance may be gently redirected to a more suitable dog. Huskies were bred for racing miles in the snow and require a great deal of exercise, a trait not appropriate for this home. However, a person looking for a jogging buddy would be the ideal adopter.

Sure, there are Siberian Huskies that enjoy loafing on the couch. However, let’s stack the deck to make sure we can make the most successful matches between dog and family. People can use breed characteristics as a general guide on what to expect, but it should not be the defining rule for an individual dog’s behavior. Accepting a dog that comes with or without the breed’s behavioral traits should be a key commitment to pet ownership.

Just think if the tables were turned. Would a dog give us away because we don’t meet their expectations? Our dogs accept us with all our faults, quirks, bad habits, and when we don’t behave the way they expected. We owe them the same consideration.

About the author: Marcia Mayeda has been the Director of Animal Care and Control for the County of Los Angeles since July 2001. Subscribe to her blog at: https://animalcare.lacounty.gov/directors_blog/

2 comments for "Op-ed: Does your dog act its breed?"