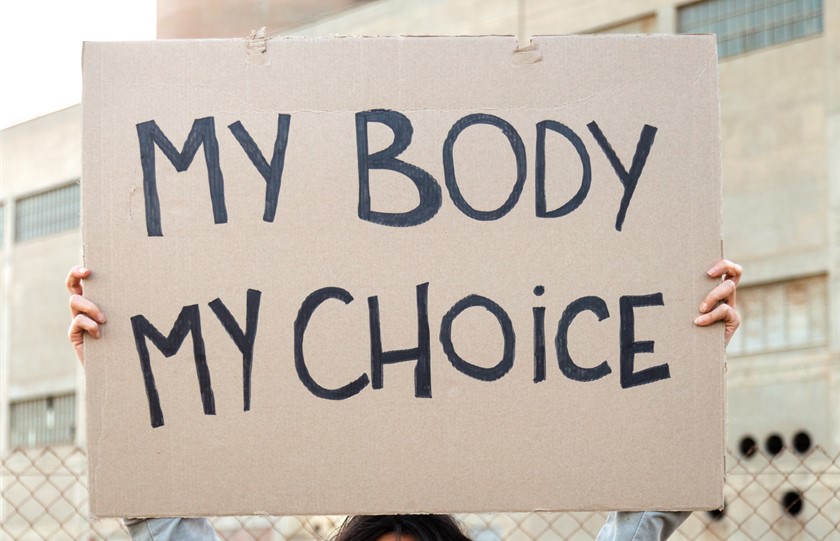 I was working a minimum wage part time job. I was uninsured. My partner did not want me to have the abortion and was doing everything he could to prevent me from doing so. I did not want to stay in a relationship with him and he knew if I had his child I would be bound to him for decades, possibly for life.

I went to what was advertised as a “free women’s clinic” on Palmdale Blvd. near 20th Street East. When I went to that clinic and told the staff I was pregnant and looking for an abortion, they took me into a room with a woman who said she was a healthcare professional. That was the first lie she told me. For the next 10 minutes she proceeded to present to me scientifically incorrect “facts” about abortion, including but not limited to: abortion causes cancer of the breasts and uterus, can make you more susceptible to STI’s, will cause infertility, brain damage and of course it will make me a murderer.

I got out of there as fast as I could and sat in my car stunned. I had read about fake abortion clinics but never thought I would find myself in one. Everything about that time in my life was surreal. Though I knew the woman’s words were lies, they still stung. It was the same narrative I had heard from my partner at the time. I couldn’t believe a woman could do this to another woman. I thought about her words “life begins at conception”. If that was true then I was even more certain that I was making the right choice. I had never thought about what kind of parent I would be but in that moment I suddenly realized if I had a child I would want them to have everything I didn’t. I would want them to skip every mistake I made and I couldn’t bear to see them suffer the same way I had when I was a child, the way I was suffering at the age of 22. According to the woman at the clinic I was already a mother and doesn’t mother know best?

I did what was best for me and the bundle of cells growing within me. I touched my stomach where those cells, no bigger than a jellybean, sat. You have no idea the situation you would be born into and I love you too much to bring you into it. So I’ll do whatever I have to do to guarantee you will be safe from this man and if it’s true that life begins at conception then one day you will understand. A mother’s love looks different on each woman and make no mistake, abortion is an act of love, of compassion and an undeniable human right.

I went to Palmdale’s Planned Parenthood and was told there were restrictions in place that forbid them from even speaking to me about abortion. A gag rule. They gave me a card with a national hotline that I could call and signed me up for a program that would give me free reproductive health services like birth control. The hotline gave me several abortion clinics, all at least an hour away. There were no abortion providers within 70 miles of the Antelope Valley.

Later that day I went over this list with my best friend and his girlfriend, who confided in me that she had an abortion when she was 18. She pointed to a name on the list and said that’s where she went, that it was safe and easy and she’d help me call and make the appointment if I needed. She assured me if it was what I wanted it was fine. She called while I sat next to her and the appointment was set for two weeks later.

I convinced my partner that if he paid for it (he had a full time job in construction and made at least twice as much as I did) I wouldn’t leave him, that I would love him for protecting me and we would have a great life together. I became very submissive to him, I did whatever he asked, waited on him hand and foot, doted on him. His ego was satisfied and he told me he didn’t want a child, it was too expensive. He said he was glad I was okay with this and he was looking forward to an easy life with me.

The day of the procedure he drove me to the clinic, we sat in the waiting room, the soft roar of the anti-choice protesters in the background, the plastic baby dolls being thrown against the window even though we were two stories up. I understood why we had to use a special entrance. He had a last moment of panic, he asked me if I would leave him after it was done more times than I could count. I remember as I sat there, terrified, not knowing what to expect, I tried to think of moments when I had faced scarier things and was at a loss. I realized then that the next time I was in a bind it would be this moment that I would think of to steel myself and remember I had been through worse. In my moment of existential despair, all he could think of was himself. It was always about him and I was a tool for his self satisfaction.

The staff called me to dress into a hospital gown, I put my belongings into a locker and sat with the other women waiting to have an abortion. We immediately begin sharing why we chose abortion. Each story different from the next. A married woman with four kids who couldn’t afford another, could barely afford to take care of the kids she had, a woman who was pregnant off a one night stand, a woman who was escaping an abusive relationship, she looked me right in the eye and asked “Is that your baby daddy in the lobby? You hate him don’t you?” We all have our reasons and each one valid. Every reason is unique just like every woman and birthing person. After the procedure I felt as if the weight had fallen from my shoulders, I had my life back. I’ll always remember what my best friend told me after it was done “he didn’t deserve to be the father of your child.” He was right.

I have never regretted my abortion. I was able to leave him shortly after. He stalked me for weeks before he gave up. In the years following, I read the stories of Gabriel Fernandez, Anthony Avalos, Noah Cuatro and knew I had made the right choice. “That would’ve been my child and me,” I thought.

A patriarchal system is not built to protect people like me. Pro-choice is pro-democracy, pro-child and pro-family. If the Supreme Court were to overrule Roe v Wade and Planned Parenthood v Casey, women like me and children will suffer gravely across the United States. If we allow women and birthing people’s rights to their own bodies to be stripped away, we are no longer a democratic nation, this decision will only be the beginning of the stripping of basic human rights to minoritized groups.

The time for our Assemblyman, Senator, Congressman and City Council’s to support the majority of people in their districts and support bodily autonomy for everyone is now. The time for grassroots organizing to protect bodily autonomy in the face of the unthinkable is now.

The laws may go back but we the people refuse.

About the author: Breanna Chico is founder of the AV Solidarity Collective @avsolidarity on Instagram.

77 comments for "Op-ed: Choice is democracy"