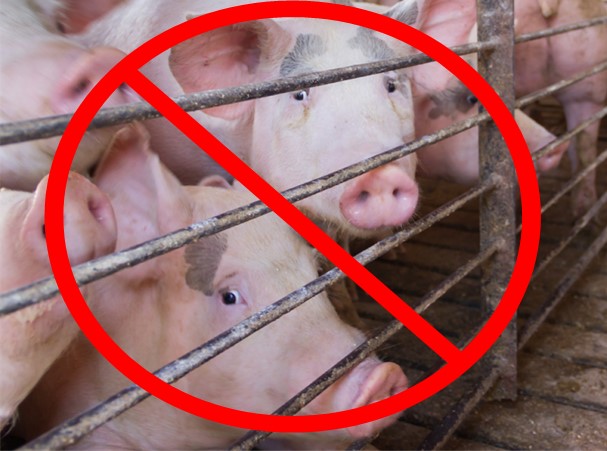 The Center for a Humane Economy (Center) and its sister organizations are calling on all California-based food retailers, especially the biggest names in the American grocery, fast food, and food service industries, to abide by the housing standards prescribed by Proposition 12 (passed overwhelmingly in November 2018) and stop selling eggs and pork from animals tightly confined in small cages or narrow crates. All provisions of Prop 12 come into effect January 1, though some elements of the ballot measure were triggered earlier by the terms of the voter-approved measure.

Earlier this month, the Center, Animal Wellness Action, Animal Wellness Foundation, and Americans for Family Farmers sued the California Department of Food and Agriculture, alleging that proposed regulations were incomplete because they did not cover the range of animal welfare and public health and safety concerns that motivated voters to demand more responsible living standards for animals. The lawsuit successfully triggered some improvements to the regulations.

“Californians first banned extreme confinement of farm animals 13 years ago at the ballot box in passing Proposition 2 by a landslide,” said Wayne Pacelle, president of the Center for a Humane Economy. “Voters then approved a second and stronger ballot measure on the same subject 10 years later by the same margin. Agribusiness companies and food retailers should not act with surprise that California is now on the cusp of implementing these anti-confinement laws. The new space standards for hens and sows – and the end of the era of immobilizing animals in small cages and crates – have been in bright lights for years.”

Prop 12 prescribes that laying hens are given sufficient space and are not kept in cages. Pork sold in the state cannot come from breeding operations using two-foot by seven-foot gestation crates. Veal calves cannot be kept in small crates, either. The measure provided suppliers and sellers ample phase-in periods to implement the changes should they choose to sell eggs, pork, and veal in California.

“The food retailers that made anti-confinement commitments years ago now need to abide by them, as a matter of law and honoring their public pledges,” added Dr. Annie Harvilicz, D.V.M., the president of the Animal Wellness Foundation in Los Angeles.

McDonald’s announced in 2012 that it “believes gestation stalls are not a sustainable production system for the future.” Kroger’s announced that “a gestation crate-free environment is more humane and that the pork industry should work toward gestation crate-free housing.” Costco said it wants “all of the hogs throughout our pork supply chain to be housed in groups” and announced “this transition should be accomplished no later than 2022.” Walmart pledged to abide by the “Five Freedoms of Farm Animal Welfare,” and one of these tenets is freedom of movement for the animals.

Ten states have passed laws banning gestation crates, and so has the entire European Union. More than 60 of the largest food retailers pledged to stop buying pork from operations that confine the breeding sows, – with many of the corporate promises ripening in 2022 (coincident with Prop 12’s legal standards).

“There’s nothing radical about letting animals move,” added Jim Keen, D.V.M, Ph.D, and the director of veterinary programs for the Center for a Humane Economy. “What’s radical is confining them in cages so small that the animals are immobilized. Now the enforcement of the law must catch up to the enactment of the law.” Dr. Keen taught farm animal science at the University of Nebraska School of Veterinary Medicine and worked at the U.S. Meat Animal Research Center of the U.S. Department of Agriculture.

The National Pork Producers Council (NPPC), the American Farm Bureau Federation (AFBF), the North American Meat Institute, and a handful of other industry actors have sued the state of California to gut the statute. But the series of cases they and their proxies have initiated — mainly arguing that the restrictions on sales of pork in California from other states violate the dormant Commerce Clause — have all been turned back by the federal courts.

NPPC and AFBF have asked the U.S. Supreme Court to hear an appeal.

NPPC and other food producers have warned of higher bacon prices, even as they work with food processors to jack up prices. The Biden Administration has called out price-gouging by the highly consolidated meat industry, including meat packers. It’s “the greed of meat conglomerates” according to White House press secretary Jen Psaki. “You could call it jacking up prices during a pandemic.”

21 comments for "Op-ed: McDonalds, Walmart, Costco, and other food retailers must abide by California law and stop selling pork, eggs from animals crammed in small cages"