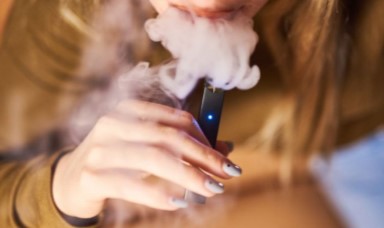 “We know that behaviors are learned and reinforced through the observation of others’ behaviors, which makes these music video product placements problematic,” said Jon-Patrick Allem, an assistant professor of research at the Keck School of Medicine of USC and principal investigator of one of the studies, which was published in Health Education & Behavior and earlier in the journal Nicotine & Tobacco Research.

He noted that the music video for “I’m the One” by DJ Khaled featuring Justin Bieber contains 8.5 seconds of specific product placements and scenes of models using vaping pens, and that the video has been viewed more than 1.3 billion times on YouTube, delivering “billions of impressions of vape pen product placement and use.”

“I’ve heard of quotes for $30,000 to put a product in a popular music video and then have those products also appear in the quick clips that are shared on platforms like Instagram,” Allem said.

The Tobacco Master Settlement Agreement of 1998 banned product placements for cigarettes and smokeless tobacco in television, music videos and motion pictures, but no such restrictions apply to e-cigarette or vaping products, researchers noted.

In Nicotine & Tobacco Research, researchers noted last December that seven music videos for songs that appeared in the Billboard Hot 100 during 15 consecutive weeks in 2018 contained e-cigarette product placement and imagery. The videos included “Te Bote” by Casper Magico, Nio Garcia and Darell, which received 1.3 billion cumulative views, along with “No Brainer” by DJ Khaled, “Narcos” by Migos and “Alone” by Halsey.

Researchers found in the second USC study, published in Health Education & Behavior, that exposure to e-cigarette product placement or imagery in music videos was associated with a higher likelihood of lifetime and past 30- day e-cigarette use among young adults in California.

Researchers say they surveyed a representative sample of 1,280 people aged 18-to-24 through an online questionnaire between August and October 2019 to explore associations between self-reported levels of exposure to music with any vaping product placement or imagery and susceptibility to vaping use. Of those exposed to vaping in music videos, those under 21 were more likely to report using the products than their older counterparts, according to researchers.

Allem noted that the “big takeaway” from the research is that those who are under the legal age to purchase tobacco or are under 21 were most likely to recall exposure to music videos with product placement and e- cigarette use.

“The next step in our research process is to tease out the exact impact or cause and effect of these marketing practices on young people,” he added.