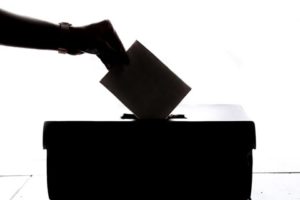 LOS ANGELES – Three seats on the powerful Los Angeles County Board of Supervisors are at stake Tuesday.

Supervisors Kathryn Barger and Janice Hahn are both up for reelection, each seeking a second term.

Candidates seeking to unseat Barger in the 5th District — which covers the Antelope Valley — are Sierra Madre Mayor John Harabedian and enterpreneur Darrell Park. Park, who often cites his experience in the White House Office of Management and Budget, picked up 41% of the vote when he last faced off against Barger in a November 2016 runoff. Barger was a political unknown at the time, despite her years of work for the county, including as a longtime aide to her predecessor on the board, Michael Antonovich.

Park points to rising homelessness on Barger’s watch as one reason new leadership is needed. He promises to convert 95% of county-owned vehicles to electric vehicles by 2023 as part of a Green New Deal for L.A. County and to immediately make all animal shelters no-kill centers, as well as donating half of his salary to end homelessness.

Harabedian has a stronger set of endorsements, including from former Gov. Jerry Brown, Secretary of State Alex Padilla and former Assembly Speaker John Perez. He lists homelessness and criminal justice reform as among his top priorities and also points to a lack of transparency in county government.

“The county employs the most incumbent-friendly, obscure electoral system in the country, which protects the status quo. It also allows for special interests and big, dark money to control the policy decisions,” Harabedian says on his campaign website, calling for changes to campaign finance laws to combat the issue.

However, Barger has the backing of dozens of mayors, city council members and other elected officials in and outside of her district, as well as the endorsement of most of the same unions promoting Hahn’s reelection.

Though Barger is the sole Republican on the county board and Park has tried to tie her to unpopular Trump policies, she is also endorsed by Hahn as well as Supervisor Sheila Kuehl, one of her most progressive colleagues.

In throwing its support behind Barger, the Los Angeles Times called her “a pragmatic moderate” who “deserves to be reelected.”

The editorial board found Harabedian to be her most worthy challenger, but concluded that his experience was too limited for him to step into the role of supervisor.

Hahn has lots of union support from firefighters and sheriff’s deputies, plus dozens of other elected officials in the cities she serves in the 4th District.

Hahn, a former Congressional representative whose father Kenneth Hahn served as a supervisor for 40 years — before term limits — is opposed by Desiree Washington, a former prosecutor who now has a private business law practice.

The 2nd District seat is wide open as Mark Ridley-Thomas terms out and seasoned politicians rush to fill the void.

In each of the races for supervisor, if no candidate receives a majority of the vote, a November runoff will be held.

3 comments for "Three seats on powerful L.A. County Board at stake Tuesday"