LANCASTER – Local families and friends are invited to a celebration in Lancaster this Saturday to commemorate the African-American cultural holiday Kwanzaa.

Themed “Re-connecting to African roots in the AV and abroad,” the free community celebration will be held from 3 to 7 p.m. Saturday, Dec. 28, at the Sol Plaza Boutique Mall, located at 1140 Commerce Center Drive.

It will include family entertainment, as well as community vendors selling food, clothing and more, according to organizers. Jamaal Brown, a lifelong Antelope Valley resident and publisher of the Black365 calendar, will be the keynote speaker.

Kwanzaa is a secular holiday celebrated from Dec. 26 to Jan. 1. It was established in 1966 as an African-American tradition that focuses on the family, community responsibility, commerce and self-improvement.

“Ten years later, the Antelope Valley has received this celebration with open arms,” Atuahene-Barrie said. “Aerick Watson, an AV resident who just came back from his first trip ever to Senegal, West Africa… said that because of celebrations like these in the AV, the trip to Senegal was not a tough adjustment. He was able to use a lot of what he learned at these local celebrations on his journey abroad.”

For more information on this year’s public Kwanzaa celebration, contact 510-978-5270.

Kwanzaa was created in 1966 by Maulana Karenga, now chair of Africana Studies at Cal State Long Beach, in what he called “an audacious act of self- determination.”

During the week, a candelabrum called a Kinara is lit, and ears of corn representing each child in the family are placed on a traditional straw mat.

African foods such as millet, spiced pepper balls and rice are often served. Some people fast during the holiday, and a feast is often held on its final night.

A flag with three bars — red for the struggle for freedom, black for unity and green for the future — is sometimes displayed during the holiday.

Kwanzaa is based on the theory of Kawaida, which espouses that social revolutionary change for black America can be achieved by exposing blacks to their cultural heritage. 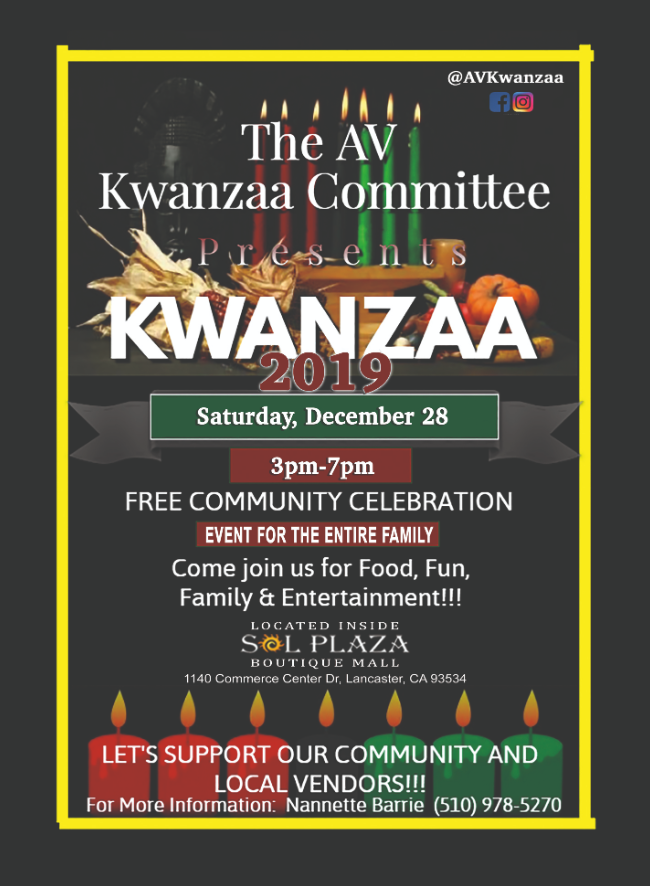 12 comments for "Community Kwanzaa celebration in Lancaster this Saturday"