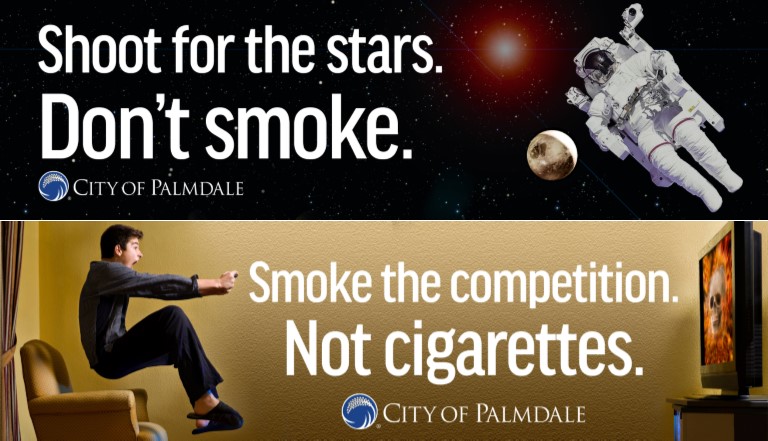 PALMDALE – The city of Palmdale has received $361,243 in state funding to tackle the illegal sale of cigarettes and tobacco products to minors as part of the California Department of Justice’s Tobacco Grant Program.

The grants were awarded to 76 local entities throughout the state to support the enforcement of state and local laws related to the illegal sales and marketing of tobacco products to minors. California Attorney General Xavier Becerra announced the recipients on Oct. 1.

“This will provide us with the necessary funding to continue our very successful tobacco enforcement and education program,” said Palmdale’s Community Compliance Supervisor Sara Gallagher.

“Tobacco is a serious threat to public health, especially to California’s youth,” Attorney General Becerra said. “These grants will support local communities in enforcing the law and educating kids about the harms of tobacco products. My office is dedicated to ensuring the state has the resources necessary to curb the dangers of tobacco and protect the public’s well-being. Preventing or reducing illegal sales of tobacco to minors will pave the way to a healthier California—we’re committed to tackling this public health crisis head on.”

The city will use the funding to continue its program. To help retailers better understand and keep in compliance, the city developed a Tobacco Retailers guide and established a No Smoking Weekly Park Patrol to keep city parks smoke free. The city also partnered with the Palmdale Sheriff’s Station to conduct inspections of tobacco retailers to ensure they were not selling to minors or making single cigarette sales. Since it began last year, the city’s efforts has led to a noticed decline in tobacco-related violations.

Education was also part of the grant funding, and the city ran an extensive anti-tobacco advertising campaign featuring billboards and online messaging to discourage tobacco use, especially among youth.

The Department of Justice’s Tobacco Grant Program is funded by Proposition 56 (Prop. 56), the California Healthcare, Research and Prevention Tobacco Tax Act of 2016. Beginning April 2017, Prop. 56 raised the cigarette tax by $2 per pack, with an equivalent increase on all other tobacco products. Prop. 56 also allocates millions of dollars annually to the California Department of Justice for distribution to local law enforcement agencies for the support and hiring of peace officers for various activities. These activities include investigations and compliance checks to reduce the illegal sale of tobacco products to minors.