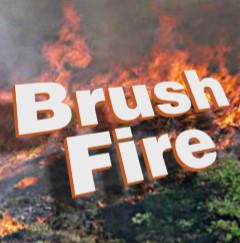 SANTA CLARITA – A vehicle fire spread into some brush along the Antelope Valley (14) Freeway in Santa Clarita Monday afternoon, burning about two acres and halting northbound traffic before it was brought under control.

The fire was reported about 2:10 p.m. Monday, April 15, near Newhall Avenue, according to the Los Angeles County Fire Department.

Crews battled the flames from the air and on the ground and had it under control within about 40 minutes. Two helicopters were deployed, two from the county fire department and one from the Los Angeles Fire Department.

Firefighters from Angeles National Forest also assisted in battling the blaze, which was sparked when a pickup truck towing a trailer went off the side of the freeway.

No injuries were reported and no structures were threatened, but all northbound freeway lanes were closed at one point due to smoke, according to the California Highway Patrol.