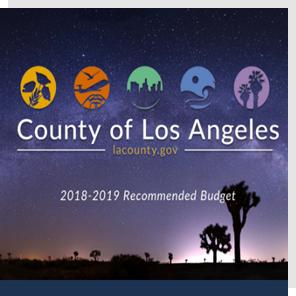 LOS ANGELES – The Los Angeles County Board of Supervisors approved $1.4 billion in changes to the county’s budget Tuesday, bringing the total to $32.8 billion.

The supplemental budget also reflects a final accounting of money raised and spent during the fiscal year ended June 30. Revenues in excess of the amount budgeted for the year and money that went unspent totaled $1.9 billion, highlighting the complexity of the county budgeting process.

Each of the supervisors drew attention to changes they had championed, with Supervisor Janice Hahn declaring the budget a picture of “who we are and who we want to be.”

Hahn pointed to investments in the county workforce, with 111,805 positions budgeted for fiscal year 2018-19.

That investment included a last-minute motion by Hahn and Supervisor Mark Ridley-Thomas to increase wages for in-home supportive services workers who tend to the needs of seniors and disabled individuals.

Homelessness remains one of the county’s most important spending priorities, and each of the supervisors mentioned it.

Ridley-Thomas noted a reported 3 percent drop in homelessness this year based on the Los Angeles Homeless Services Authority point-in-time count.

“That’s trending in the right direction,” Ridley-Thomas said. “And we need to keep working. We need to keep being smart about it.”

Supervisor Hilda Solis characterized the overall budget as “fiscal conservatism … but with a big S for sensitivity.”

Criminal justice advocates joined Solis in hailing the move to add more lawyers to an immigration team in the public defender’s office.

“Without expert support to deal with the incredibly complex immigration laws, a public defender could inadvertently put a non-citizen client in danger of deportation, even for a minor, misdemeanor offense,” the ACLU said in a statement issued after the board’s vote.

“Each year I remind us how important it is to set aside money in our rainy day fund,” Barger said.

An additional $7.8 million was earmarked for that fund, in addition to $39 million already budgeted, bringing the balance of the reserve to $525 million.

Barger also pointed to the addition of 10 new mental health field teams that work with law enforcement to try to convince people dealing with serious mental illness to seek treatment, rather than landing in jail.

“In the long run, it will prevent people from being put in our jails that do not belong there,” Barger said.

Other highlights of the supplemental budget — among dozen of others — include:

— $20.4 million to enforce Proposition 63 by ensuring that felons don’t own guns;

— $7.5 million for a program seeking to place foster children with relatives; and

Supervisor Sheila Kuehl noted the sheer scale of the budget, which is larger than that of many states, and its power to serve the needs of 10 million county residents.

“We’re the safety net. There is nothing but us, people rely on us,” Kuehl said.