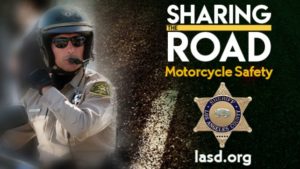 PALMDALE –  In an effort to lower deaths and injuries on local roadways, the sheriff’s department will conduct a specialized Motorcycle Safety Enforcement Operation in Palmdale this Wednesday, June 13, authorities announced.

In the past three years, motorcycle-involved crashes in the areas  policed by the Los Angeles County Sheriff’s Department have resulted in 1,332 fatal and injury crashes, sheriff’s officials said in the news release.

“Operations like this are aimed at curbing any more rises in motorcycle deaths and sending the numbers back downward,” the news release states.

Authorities issued the following safety tips for motorcyclists to “see and be seen”:

Funding for the local Motorcycle Safety Enforcement Operation is provided by a grant from the California Office of Traffic Safety through the National Highway Traffic Safety Administration.

18 comments for "Motorcycle Safety Enforcement Operation in Palmdale this Wednesday"