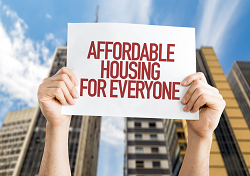 LOS ANGELES – The Los Angeles County Board of Supervisors moved Tuesday to spend $43.7 million to build 558 units of affordable housing — with nearly three-quarters set aside for homeless individuals, including veterans, and those with serious medical or mental health issues.

The nine projects are expected to obtain tax credits and $230 million in other funding to move forward and could be ready to break ground in 12 to 18 months, according to Monique King-Viehland, who was formally appointed Tuesday as executive director of the Community Development Commission/Housing Authority.

The Los Angeles County Board of Supervisors also voted Tuesday to move forward with four ordinances designed to increase the supply of affordable housing.

“The housing crisis in L.A. is so severe, there’s just no one magic bullet,” Kuehl said. “We need to increase the overall supply of housing, we need to preserve the affordable housing that we have, we need to regulate rents.”

Rent control was not among the ordinances under consideration, but the board directed regional planners to draft regulations to:

— eliminate zoning restrictions that create obstacles to affordable housing and homeless shelters; and

The inclusionary housing policy drew fire from real estate interests and Supervisor Kathryn Barger, who voted against that particular ordinance.

Barger said that a requirement for developers to support affordable housing could lead to higher housing costs, exacerbating the supply problem and making it more difficult for low-income families to find a home.

“Government needs to get out of the way, not stand in the way,” Barger said.

She and others also said the board needed to take more time to develop its response to a 753-page Department of Regional Planning report issued Jan. 31, which recommended seven strategies for increasing the supply of affordable housing.

“We must do this work with a sense of urgency,” Ridley-Thomas said, adding that homelessness is “not just daunting … it’s outpacing us … we need to step up our game.”

The details of the inclusionary housing ordinance are yet to be drafted, but could include fees in lieu of development, off-site development, dedication of land for development or the acquisition and rehabilitation of existing affordable housing.

What no one questioned is that Los Angeles County needs more affordable housing. The planning report found that the county needs to add 17,116 housing units in unincorporated areas for low and moderate-income individuals and families. That’s a high hurdle, as only 226 units were added in those communities in 2014-16.

A recent report by the Los Angeles Homeless Services Authority also highlighted the need, calculating that the county has less than half the number of permanent supportive housing units it needs for homeless individuals, falling more than 22,000 units short. That’s on top of the need to boost the number of emergency shelter beds by more than 50 percent.