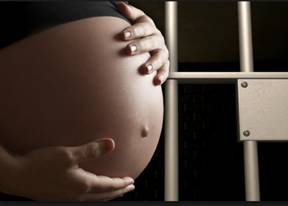 LOS ANGELES  – The Los Angeles County Board of Supervisors voted Tuesday to look at ways to better support pregnant inmates in jails and juvenile halls.

“To the extent these women are thought of at all, they are painted as bad moms who have failed by engaging in wrongful criminal activities,” Solis said. “But for many incarcerated women and girls, their pregnancies were precipitated by their own physical and sexual abuse.”

The Century Regional Detention Center, where 35 current inmates are pregnant, offers programs including child visitation, classes on child development, advice on child custody and referrals for postpartum depression, according to a largely positie report by the Office of Inspector General. But the report also raised concerns, including complaints from pregnant inmates about being “dragged around” while handcuffed to other prisoners while traveling to and from court.

The OIG said the department has discontinued the practice of cuffing pregnant women to other inmates.

Another issue is an infestation of flies in jail sink holes and drains.

“Although the water is tested regularly and is deemed safe to drink, the presence of flies and larvae in the drains from which the drinking water is dispensed is concerning,” according to the report, which says mothers-to-be avoid the water and poor inmates cannot buy bottled water from the jail commissary.

The long-term solution to the infestation, caused by inmates putting food down drains, is to replace underground pipes, but in the meantime, the Sheriff’s Department is looking at filtration systems.

And because families are not allowed to be present during labor and delivery, the OIG has recommended support services, including from a “doula,” who can help during childbirth.

“These women and girls need to know that they do not have to go through this alone, and the county has services to support them both physically and emotionally during this time of their lives and beyond,” Solis said.

A report is expected back in 90 days.