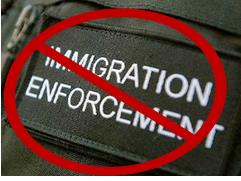 LOS ANGELES – The Los Angeles County Board of Supervisors voted Tuesday to bar access to non-public areas of county properties — including hospitals, libraries and social services offices — to federal immigration agents without a warrant.

“We know that Los Angeles County is often the safety net of last resort for so many who live here and face hardships,” Solis said. “Our county provides services that allow people to get back on their feet or get through very challenging times. However, many immigrants in our county do not feel safe to access these services.”

The policy also does not apply to jails, courthouses or public schools because the county lacks jurisdiction in those locations.

However, a county lawyer pointed out that 72 percent of public schools in the county are in districts that already protect students from immigration enforcement.

“School districts can impose much greater restrictions” on their own, the attorney told the board.

As for jails, the Sheriff’s Department allows ICE agents in the downtown Inmate Reception Center, but the lawyer assured the board that “they are there only for the purpose of accepting the transfer of inmates” who qualify for federal detention.

The lawyer also noted that computers belonging to ICE had been removed from an office in the IRC in August and the related data lines were shut down. That action was taken after the Office of Inspector General informed the Sheriff’s Department that it was preparing a report about the use of the computers in contradiction to public statements that ICE agents had vacated county jail offices.

Advocates for immigrants praised the new policy, which county lawyers have been working on since April.