PALMDALE – A driver died Thursday night after his car drifted into the opposing traffic lanes and collided with a sport utility vehicle in Palmdale, authorities said.

The fatal collision occurred around 11:35 p.m. Thursday, June 22, on Pearblossom Highway just east of 25th Street East, according to a news release from the Palmdale Sheriff’s Station.

“A silver Honda was traveling eastbound on Pearblossom Highway and, for unknown reasons, the driver lost control of his vehicle and drifted into the opposing traffic lanes,” the news release states.

“The silver Honda was then struck broadside on the passenger side by a blue Toyota SUV… traveling westbound on Pearblossom Highway. As a result of the collision, the silver Honda separated in two halves,” the news release states.

Both parties were treated on scene by Los Angeles County Fire Department paramedics. The Honda’s driver was pronounced dead at the scene. His name has not yet been released pending next of kin notification, but he was a Hispanic man between 30 and 35 years old, coroner’s Assistant Chief Ed Winter said Friday morning.

Pearblossom Highway, between 25th  and 30th Street East, was closed until about 6 a.m. Friday, June 23, to allow for the crash investigation.

The investigation is ongoing.

Anyone with information regarding this traffic collision is encouraged to call Palmdale Station’s Traffic Department at 661-272-2400. 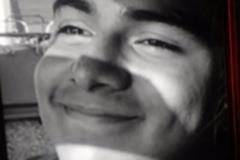 UPDATE: Family members have identified the victim as 18-year-old Victor Manuel Hernandez of Palmdale. They said he was coming home from work at the time of the fatal collision.

An online fundraiser has been created to help cover the cost of his burial. To donate to this effort, visit: https://www.gofundme.com/mj9nm-victor-m-hernandez