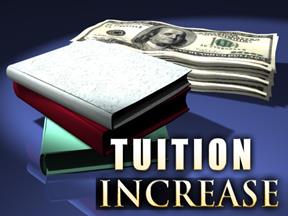 LOS ANGELES – The California State University Board of Trustees voted Wednesday to raise tuition by 5 percent for the 2017-18 school year to address a shortfall in funding from the state.

The trustees approved two amendments — one to rescind the hike if sufficient state funding comes through, and another calling for reports over the next two years detailing how the additional dollars are spent.

Barring more funding, annual in-state tuition will increase by $270, from $5,472 to $5,742. Similar increases were approved for non-resident tuition, along with increases in graduate, doctoral and teacher-credential programs. The changes are projected to generate $77.5 million in the 2017-18 school year.

CSU Chancellor Timothy White told the board that he had no choice in asking for more tuition.

“I don’t bring this forward with an ounce of joy. I bring it out of necessity,” White said as students in the audience booed.

Those percentages will be maintained even with a tuition increase, CSU’s chief financial officer told the board, in part because $39 million in financial aid will be added.

But many students said they still can’t afford an increase. Before the meeting, dozens gathered outside the CSU Chancellor’s office, where a mock graveyard of headstones featuring the names of each of the CSU campuses was set up.

“The more we pay, the longer we stay,” students chanted, saying working more hours meant they couldn’t attend the classes needed to graduate.

Dozens of students in graduate caps and gowns made their way inside the boardroom, some wearing signs around their necks showing the amount of student debt they had accrued.

They periodically interrupted the meeting to shout “Chancellor White, do what’s right!” or “mic check” when they disagreed with comments by the trustees.

A group known as the Students for Quality Education says that while tuition has been frozen for four years, the cost of attending CSU increased by 283 percent between 2002 and 2012.

“We pay for housing, we pay for textbooks, we pay for food,” a representative of the California State Student Association told the board.

Gov. Jerry Brown’s budget proposal released in January included a $157.2 million increase in state funding for the CSU system, but it was still $167.7 million short of what the CSU had requested. In addition to the tuition increase, CSU officials said they plan to continue lobbying for increased funding from the state.

CSU’s chief financial officer, Steve Relyea, said that without the revenue, fewer courses would be available and students would need more time to graduate.

“The revenue generated by this increase will allow us to add faculty, courses, advisers and other resources to improve students’ opportunities for success,” Relyea said. “We will ensure that students who require the most financial assistance will not face any additional burden associated with the tuition increase.”

The California Faculty Association disagreed with the increase, calling it a tax on students who may already be working 30 hours a week, and saying the burden should be on the state.

“We want the state to increase the student budget,” association President Jennifer Eagan told City News Service outside the boardroom. “This is an investment in the future.”


26 comments for "CSU board votes to raise tuition"