LITTLEROCK — Authorities are looking for a 26-year-old Palmdale woman who allegedly fled the scene after the vehicle she was driving careened off the roadway, overturned and struck a utility pole, killing two and injuring three of her passengers.

“Driver Samantha Lozano fled the scene in an unknown vehicle and is currently being sought,” states a report by the California Highway Patrol.

The fatal collision occurred around 4:30 p.m. Saturday, Feb. 4, on Palmdale Boulevard, west of 130th Street East, according to the CHP report.

Lozano was driving a 1999 Infinity G20 westbound on Palmdale Boulevard, past 130th Street East, when the vehicle veered to the right onto the dirt shoulder, the CHP report states.

Lozano was unable to maintain control of the vehicle, which “went to the left and then back to right and began overturning onto the dirt shoulder,” the CHP report states.

“[The vehicle] then collided with a wooden utility pole before coming to rest on its wheels,” the CHP report states.

Passenger Steve Wissar Jr., 20, of Palmdale, sustained fatal injuries and was pronounced dead at the scene, according to the CHP.

Four people in the backseat of the car were ejected while the vehicle was overturning. All four backseat passengers — Sodel Wissar, 21, of Palmdale; Talia Novak, 20, of Palmdale; Jacob Soto, 18, of Urbandale, IA; and a 17-year-old boy from North Hills — were transported to local hospitals with major injuries, the CHP report states.

Novak was later pronounced dead, according to the CHP report.

Anyone with information on Samantha Lozano’s whereabouts is encouraged to contact the Antelope Valley CHP Office at 661-948-8541.

Anyone who saw the crash is encouraged to contact investigating office J. Hart at the AV CHP Office.

UPDATE 2.7.17: The CHP has released an image of driver Samantha Lozano. 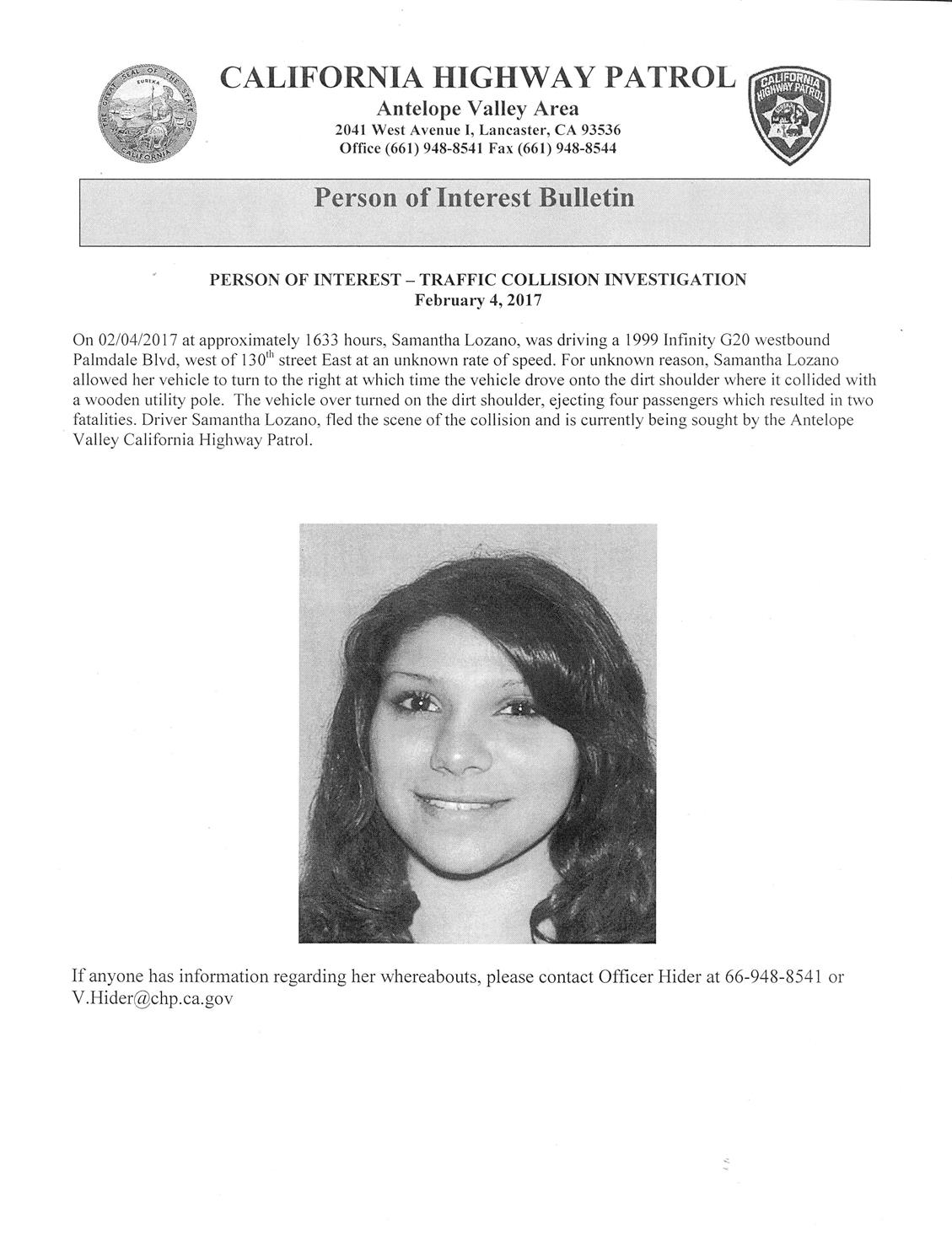