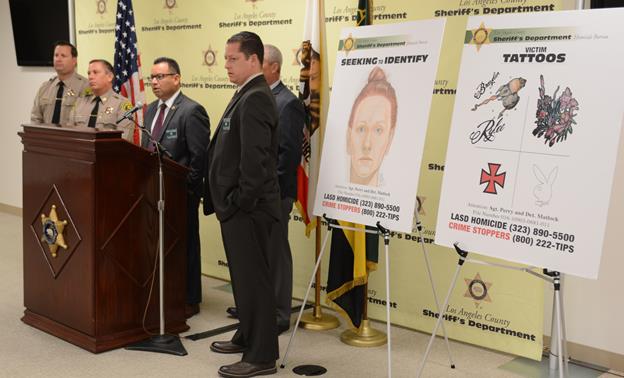 GORMAN – Authorities on Thursday released drawings of the face and tattoos of a woman whose body was found near state Route 138 in the unincorporated Gorman area in hopes of identifying her. 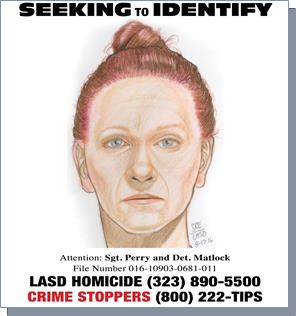 A motorist spotted the woman around 5 p.m. Sunday, Aug. 14, in some brush in a remote area along Gorman Post Road, north of state Route 138.

“Homicide detectives have learned that a passing motorist saw the victim lying in the brush after making a momentary rest stop during a long drive,” said Deputy Juanita Navarro-Suarez of the Sheriff’s Information Bureau. “The victim … appeared to be unconscious, prompting the motorist to call 911.”

Responding deputies and firefighters “discovered that the victim had suffered trauma to her head,” and she was pronounced dead at the scene, Navarro-Suarez said. 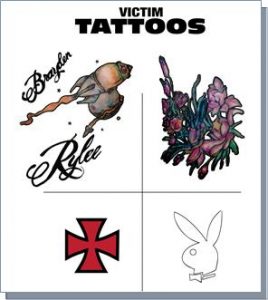 An autopsy was pending.

At a news conference Thursday, detectives displayed a drawing of the woman’s face, along with drawings of her tattoos, which included a Playboy rabbit head, a cross, flowers, and the words Brayden and Rylee.

She was described as white or Hispanic, 25 to 35 years old, 5 feet 1 inch tall and 96 pounds. She had blue eyes, and her hair was dyed a dark burgundy color.

Anyone with information is urged to call the Sheriff’s Homicide Bureau at 323-890-5500. Anonymous tips can be submitted through Crime Stoppers by calling 800-222-TIPS or at the website lacrimestoppers.org.