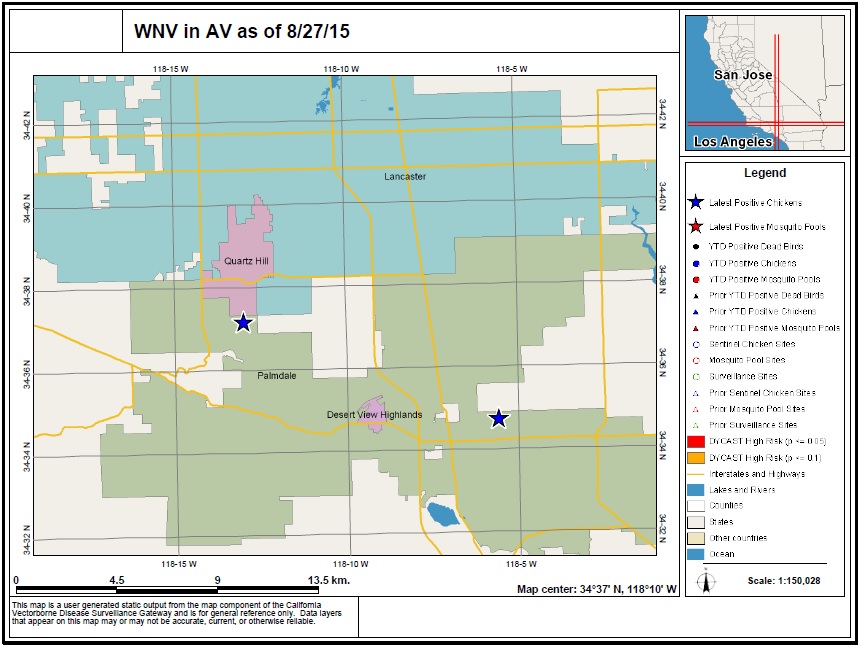 PALMDALE – The Antelope Valley Mosquito and Vector Control District confirmed Thursday that a sentinel chicken from a flock in east Palmdale tested positive for West Nile Virus, the second positive test for the virus this year.

“We utilize 10 flocks of chickens that are strategically located around the Antelope Valley to monitor for West Nile Virus,” said District Manager Cei Kratz. “When our chickens test positive, we know that there are infected mosquitoes in that area.”

The first sign of the mosquito-borne disease in the AV for 2015 was detected last week, when a chicken from a sentinel flock in Rancho Vista tested positive for West Nile Virus.

West Nile Virus is transmitted by the bite of an infected mosquito. Most people who are infected do not show any symptoms, however, West Nile Virus is a potentially debilitating disease. Even mild cases of West Nile fever can cause patients enormous pain and discomfort for months. Older adults and those with weakened immune systems are at greater risk for complications than others. In 2013, West Nile Virus contributed to the death of a West Lancaster man in his 70s. [Read more here.]

The California Department of Public Health, as of Aug. 26, reported West Nile Virus activity from 39 counties in 552 dead birds, 1,768 mosquito samples, and 150 sentinel chickens, as well as 57 human cases with two deaths.

District officials are urging residents to follow these tips to avoid getting mosquito bites and West Nile Virus infection:

[Information via news release from the Antelope Valley Mosquito and Vector Control District.]

Previous related story: First sign of West Nile Virus in the AV for 2015