PALMDALE – The city of Palmdale recognized the students of Team 5012 Gryffingear for their world championship win at this week’s council meeting. The robotics team from the Palmdale Aerospace Academy recently won the world champion title against more than 600 competitors at the For Inspiration and Recognition of Science and Technology (FIRST) World Championship in St. Louis, Missouri.

“When you connect young people with experts, leadership, mentoring, it creates a passion,” said Palmdale Mayor Jim Ledford. “They prevailed.” 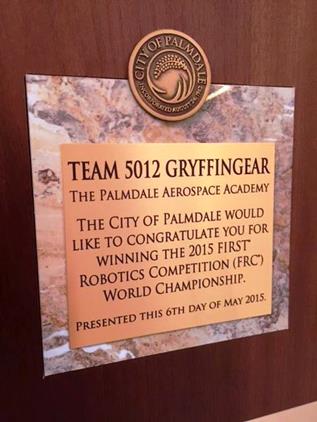 Gryffingear has been a FIRST robotics program participant since 2013, and it only took two years for the team to win first place. The team of approximately 35 members, including engineering, marketing, and design specialists from the Academy, participated in the competition.

The academy’s robotics team, designated FRC Team 5012, is named “Gryffingear,” a reference to the Gryffindor House of Wizardry from the Harry Potter franchise.

Gryffingear, as part of a three-team alliance, prevailed over 75 teams in the Newton Division of the world championship competition. From there, as part of a four-team alliance, Gryffingear advanced to the Einstein stage and competed against the other seven division winners, where they emerged as the 2015 FRC World Champions.

“The ability for our students to win the world championship is astounding,” said the Palmdale Aerospace Academy Headmaster Dr. Laura Herman. “Our students have the opportunity to build relationships worldwide and share their experience to improve our cutting-edge programs.”