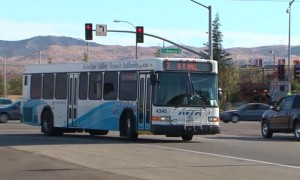 LANCASTER – Local residents will have the opportunity to weigh in on a combination of proposed service changes and fare modifications being considered by the Antelope Valley Transit Authority (AVTA). The transit agency is seeking public comment through outreach efforts that will take place in the next few weeks at Lancaster City Park and the Palmdale Transportation Center.

All of the public input received will be incorporated into the final recommendations to the AVTA board of directors at its May 26 meeting. If approved, the fare and service changes would go into effect June 29, 2015.

The most notable proposal would realign local Route 1 from Avenue S to Palmdale Boulevard in preparation for a future Bus Rapid Transit project. The proposed service changes also include adjustments to Routes 2, 3, 5 and 7, as well as the expansion of service on Commuter Route 786.

Scheduled pick-up times during the evening commuter service have also been modified to every 20 minutes for most trips. All proposed local changes would maintain schedule frequencies and connectivity along current corridors. Service change details can be viewed by visiting www.avta.com.

“Throughout the year, changes occur to roads, businesses and communities that can impact transit networks,” stated AVTA Board Chair Marvin Crist. “AVTA is committed to responding to these changes by adjusting and modifying services to ensure the transit system runs as effectively and efficiently as possible.”

The transit agency is also studying the possibility of restructuring the current fare schedule.

AVTA ridership has grown by 30 percent since 2011, and the number of customers who ride for free has increased from 38 percent to 50 percent during that same time period. Despite the significant increase in ridership, AVTA fare revenues have decreased by about 1 percent on the local transit service.

A half-fare rate for seniors and disabled passengers is under consideration, along with eliminating TAP card discounts. To assist those who cannot afford the added cost, AVTA is proposing to implement a Rider Relief Transportation Program, which will offer discount coupons toward monthly bus passes based on income eligibility.

The proposal also calls for adjusting the Day Pass from $3.75 to $5, as the price has not been changed in over a decade. The pass is intended to provide customers with a significant discount should they need to take four buses or more in one day.

The first scenario proposes to reduce the cash fare by nearly 35 percent and eliminate the TAP fare discount. The second proposal would reduce the cash fare by up to 40 percent and implement a $10 flat one way fare for every commuter route. The second proposal would also eliminate the TAP fare discount to reduce fare structure complexity. Both proposals adjust the monthly pass pricing from between 20 percent and 30 percent, depending on the base fare under consideration.

The fare adjustments are necessary to cover increased operating expenses that are connected to the addition of three new commuter runs, which were added in October 2014 to reduce overcrowding.

Finally, the fare restructuring proposal seeks to adjust the North County Transporter’s one way fare from $4 to $5. The service was created in August 2012 through a grant from the Los Angeles County Board of Supervisors. The grant funds are no longer available, and a fare adjustment is needed in order to maintain service levels.

Residents are encouraged to visit www.avta.com to view all the proposed changes and to provide feedback by emailing planning@avta.com.


22 comments for "Have your say on proposed AVTA service changes, fare modifications"