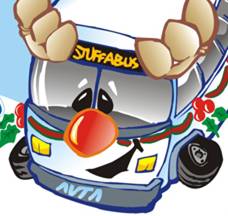 AVTA’s goal is to collect enough donations to “stuff” a 40-foot bus full of gifts this holiday season!

The AVTA Stuff-A-Bus will roll down Lancaster Boulevard Saturday, Dec. 6, as part of the Lancaster Chamber of Commerce Christmas/Holiday Parade.

Immediately following the parade, the Stuff-A-Bus will be parked in front of the Antelope Valley Mall, from 12 to 5 p.m., to collect donations from the community. KMIX and the Quake will broadcast live from the event, and AVTA will have free balloons for all.

The next collection event will take place Sunday, Dec. 7, at the Walmart in West Lancaster on Valley Central Way. The Stuff-A-Bus will be there from 10 a.m. to 5 p.m. and will again have live radio broadcasts and free balloons.

“The AVTA Stuff-A-Bus has become a holiday tradition with more than 20 years of history. We are very proud of this annual effort,” stated Executive Director Julie Austin. “The toy drive has become our signature fundraiser, with more donations of toys and clothing each year, and more opportunities to help a child in need.”

Stuff-A-Bus will also make an appearance on Palmdale’s “Miracle Mile” (47th Street East) as part of the Palmdale Chamber of Commerce “Grinchmas” Holiday Parade, Saturday, Dec. 13. That evening, the Stuff-A-Bus will be at the “Magical BLVD Christmas” on Lancaster Blvd. from 5 p.m. to 9 p.m. This will be the final collection event of the season before toys are passed out to five local charities.