LANCASTER – AV Community Collaborative is inviting the entire Antelope Valley community to a Sunset Prayer and Candlelight Vigil on April 23, to keep serial rapist Christopher Hubbart from being conditionally released to an Antelope Valley residence.. 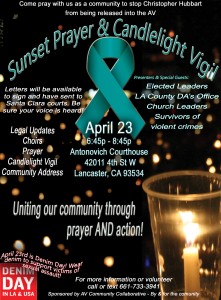 The Vigil will start at 6:45 p.m. at the Michael D. Antonovich Antelope Valley Courthouse, located at 42011 4th Street West in Lancaster.

“We stand together, united, against the release of Christopher Hubbart into the AV. We will have special guest speakers to update us on what the DA’s office is doing to stop this. And we will have four very special prayers offered up by local pastors from a diverse set of churches,” organizers stated in an email.

The event will also feature “music and prayer to lift up our community,” according to organizers. View a flyer for the event here.

Christopher Hubbart, 63, admitted to raping approximately 40 women between 1971 and 1982. He was nicknamed the “Pillowcase Rapist” because he muffled his victims’ screams with a pillowcase over their heads. View a timeline of Hubbart’s criminal, social, and legal history here.

Hubbart may be housed at 20315 East Avenue R when he is conditionally released, Santa Clara County Judge Gilbert Brown announced earlier this month. There is no date scheduled for Hubbart’s release, but a public hearing on his proposed residence will be held May 21 in San Jose.

The public has until May 16 to submit written public comments to Judge Brown by email to HubbartLASafetyTaskForce@da.lacounty.gov or by mail to: