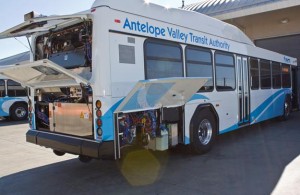 LANCASTER  – Surveyors will be out in force this week, seeking input from transit passengers on how best to improve service for the Antelope Valley Transit Authority (AVTA).

It’s part of a comprehensive study by the AVTA to develop a 10-year plan intended to improve current service levels and provide analysis for future endeavors. The study, known as the “Route to Success” is being conducted by Nelson/Nygaard, a consulting firm based in San Francisco.

Surveyors will be taking community input on Thursday, January 30, at the transit centers at Lancaster City Park and at the Palmdale Transportation Center from 12 p.m. to 7 p.m. There will also be a special table set up at Antelope Valley College from 12 p.m. to 2 p.m. to ensure student passengers have an opportunity to provide their opinion.

“We look forward to asking how the AVTA can improve its service. We recognize our transit customers are our best sources for insight and feedback regarding the AVTA system,” stated AVTA Chairman Norm Hickling. “We hope to engage those who commute as well as those who ride our local transit in order to gain a comprehensive perspective.”

Every aspect of the transit agency’s operations will be evaluated.

Recommendations for improvement and future planning are anticipated by June of this year. Nelson Nygaard, in cooperation with the AVTA, has also been conducting stakeholder meetings as part of the analysis.

Residents can provide input by filling out a survey posted in the spotlight portion of the home page on AVTA’s website, www.avta.com. The AVTA encourages everyone to provide their opinion.

The Route to Success will also evaluate which routes will be best served by AVTA’s new electric buses, which are scheduled for delivery in April and will be part of a 12-month demonstration project. The staff of Nelson Nygaard is also scheduled to evaluate potential routes for a future Bus Rapid Transit (BRT).

AVTA’s Executive Director Julie Austin has asked for a financial plan to accompany the study in order to ensure recommendations remain financially feasible moving into the future. “Our first priority is to improve our service by identifying problems that can be repaired in the short term,” stated Austin. “It’s also vital that AVTA have a ten year plan in place if we are to accomplish major goals like Bus Rapid Transit.” The RTS study will include three, five, seven and 10 year recommendations to help guide AVTA’s implementation process.

5 comments for "AVTA conducting surveys for “Route to Success” plan"