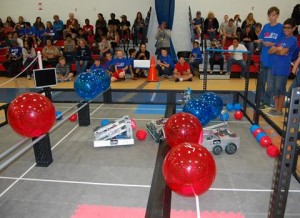 QUARTZ HILL – Joe Walker Middle School STEALTH Academy on Saturday hosted the first annual VEX Jets Toss up Competition for middle schools. The event was the first ever VEX robotics tournament in the Antelope Valley. It brought together more than 200 students from schools across Southern California, including Victorville, Northridge, Temple City, Simi Valley and Ridgecrest.

“We have 19 teams here,” said Matt Anderson, who teaches the VEX Robotics Class at Joe Walker Middle School, STEALTH Academy. “Every year, VEX robotics comes up with a new game, and this year it’s called VEX Toss Up.”

The “Toss Up” competition challenged robotics teams to score points by programming and controlling their robots remotely to place colored buckyballs and large inflated balls into scoring zones and goals on a 12-by-12-foot court.

“Besides building a robot, it teaches them teamwork, the dedication that’s needed from the team,” Anderson said. “Plus, all the STEM-related fields are in there.”

“I like the engineering aspect and the competitive aspect,” Smith said, when asked what she enjoyed most about the tournament.

“We definitely learned communications skills and how to work well with other people,” said eighth-grader Lucas Vasquez, who programmed the robots for all three VEX Jets teams. “Of course we learn about competitiveness, but we learned that’s not everything to focus on. It’s more about having fun and building your robot,” Vasquez continued.

One of the VEX Jets teams (TEAM 4073a) made it to the semi-finals and placed fourth overall in Saturday’s tournament. That team also took home the Think Award. Another VEX Jets team (Team 4073b) received the Design Award.

The following is the complete list of awards from Saturday’s VEX robotics competition at Joe Walker Middle School STEALTH Academy: