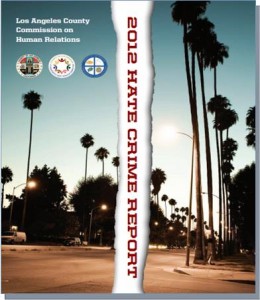 In 2012, the largest number of reported hate crimes (105) occurred in the Metro Region (spanning from West Hollywood to Boyle Heights). Meanwhile, the Antelope Valley, which includes Lancaster, Palmdale, Quartz Hill, Littlerock, Lake Los Angeles, Acton and Gorman, had a total of 31 hate crimes in 2012.

When accounting for population, the Antelope Valley tied with the Metro Region at 8.3 reported hate crimes per 100,000 residents, the highest rate of hate crimes.

Overall, hate crimes reported in Los Angeles County in 2012 declined 6%, from 489 to 462, the second lowest number in 23 years. Similar to past years, four groups constituted 86% of all hate crime victims in 2012: African Americans, lesbians and gay men, Jews, and Latinos.

“We are encouraged that for several years in a row the number of hate crimes in L.A. County has been about half of those reported in the late 90s and early 2000s,” said Robin Toma, LACCHR Executive Director in a press release. “However, there are several persistent areas of concern that require heightened attention, namely the number of anti-black crimes committed by Latino gang members, and the continued high rate of violence experienced by the gay, lesbian, and transgender communities.”

Sexual orientation attacks constituted 28% of hate crimes, and they were more likely to be of a violent nature, with gay men being targeted in 91% of these cases.

The 2012 Hate Crime Report detailed three of the 31 reported hate crimes in the Antelope Valley.

June 15, Lancaster—An African American female was exiting a market pushing a shopping cart. A white male pushed her cart to keep it from hitting him. The daughter of the woman appeared and said, “Don’t fu****g touch my mother’s cart.” The victim explained why he’d touched the cart and entered the store. The suspect followed him, yelling, “You fu****g redn**k! You cra***r! Motherf****r!” She then punched him in the face and tased him with a stun gun. The suspect shouted, “Run, you fu****g white boy!”

July 24, Palmdale—Two black victims (one who identifies as gay and the other as a transgender woman) were eating in a fast-food restaurant. Three black males and one black female approached them and one of the men shouted, “You’re a f**kin’ fa***t! You should be a man!” The suspect repeatedly punched the gay victim. The victims ran away but were pursued by the suspects in a car driven by the female. The male suspects exited the car and continued to beat the gay male victim.

October 28, Lancaster—A Latina woman discovered her home had been ransacked, burglarized, and vandalized. Unknown persons stole her washing machine and dryer, made numerous holes in the walls, and clogged two shower drains with towels to cause flooding. She found numerous swastikas drawn on walls and windows as well as the phrases, “White Power” and “F**k Mexico.”

Not detailed in the report was a racially-motivated incident that occurred at the Antelope Valley Mall on June 9, 2012. Charles Earl Thompson and James Steven Fallon confronted two Black men in the parking lot, hurled racial slurs and threats at the men, and then chased the men with pocket knives, according to testimony at a preliminary hearing. Thompson hurled racial slurs at the responding deputy and kicked out the back window of his patrol car, according to the deputy’s testimony. Read more here. In July 2013, a jury found Thompson and Fallon guilty of hate crimes and multiple other offenses in connection with the incident, according to court records. The men are appealing their convictions.

According to the 2012 Hate Crime Report, evidence of white supremacist ideology declined from 21% to 16% of all hate crimes. The great majority of these were crimes against property and were of a non-violent nature, the report states.