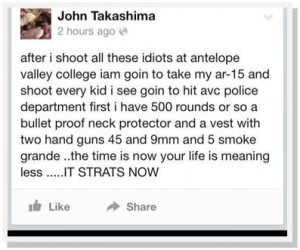 LANCASTER – A Facebook threat against the Antelope Valley College campus on Monday has prompted an investigation by the Los Angeles County Sheriff’s Department, authorities said.

Early Monday afternoon, several panicked readers sent screenshots to The AV Times from a Facebook account registered to the name “John Takashima.” The readers said they had also reported the threat to the sheriff’s department. View the Facebook page here.

According to LASD inmate records, a 24-year-old named John Takashima was arrested by Lancaster Sheriff’s deputies for an unrelated felony on Sept. 4, and has been in custody since then.

Lancaster Station officials on Monday confirmed that Takashima was in County jail.

“He’s in custody, so he’s not out there fulfilling a wish to go onto the campus and shoot anybody because he’s locked up,” said Sgt. Moore of the Lancaster Sheriff’s Station. Moore said he was aware of the Facebook threat, and said that deputies assigned to Antelope Valley College were “on top of it.”

He said the matter was still under investigation, and no more information was immediately available.

“The Los Angeles County Sheriff’s Department is currently investigating a Criminal Threats case which involved a posted message on Facebook and shared on other social media platforms. This posting referenced the Antelope Valley College Campus. The College Administration and Law Enforcement personnel from the Lancaster Sheriff’s Station are working closely to resolve this case. We take all threats serious and will investigate this case thoroughly as normal procedure. The College campus and surrounding areas have an elevated Deputy presence. Anyone witnessing anything suspicious is asked to report it to the Lancaster Sheriff’s Station at (661) 948-8466. Any emergency immediately occurring should be reported by dialing 9-1-1.”

Antelope Valley College has received an unsubstantiated threat from an individual who was in custody on an unrelated charge at the time the threat was issued.

The Los Angeles County Sheriff’s Office is actively investigating the threat and has an increased presence on both the Lancaster campus and the Palmdale center. Please remain vigilant; if you notice anything suspicious, or untoward, please call the security office at extension 4444 from a campus phone or at 661-722-6399.

Antelope Valley College will remain open at this time and for classes this evening.

UPDATED @ 8:20 p.m., 9/9/13: The following press release was issued by the Lancaster Sheriff’s Station just minutes ago:

Detectives and deputies from Lancaster Sheriff’s Station are conducting a criminal threats investigation, which involved the Antelope Valley College. The threat was communicated through Facebook from the user page of John Takashima at approximately 11:00 a.m. The threat referenced possessing multiple firearms and using them to shoot police and personnel on campus. The author of the posting also sent a second message indicating a desire to commit suicide.

Additional deputy personnel supplemented the normally assigned deputies and armed security officers on campus as the regular schedule of college classes continued. Students were advised of the threat and asked to remain vigilant in reporting any suspicious activity to deputies.

Detectives discovered Mr. Takashima had been in Los Angeles County Sheriff’s custody at Twin Towers Correctional Facility since his September 4th arrest for an unrelated felony charge. Detectives have been working very closely with College Administration and Facebook operations.

Additional resources have been dedicated to this investigation to continue to keep the college campus safe. The community is asked to report any suspicious activity to Lancaster Station Detectives Dillard or Rissling at (661) 948-8466.