LITTLEROCK – A 32-year-old Palmdale man was killed and his one-year-old passenger was injured in a three-vehicle collision Wednesday morning, authorities said.

The fatal collision happened around 11:04 a.m. Wednesday on Avenue T, just east of 80th Street East, according to a California Highway Patrol report.

Sergio Gutierrez was driving a 1998 Toyota Corolla, headed westbound on Avenue T, when he failed to stop and rear-ended a Toyota Camry that was stopped behind traffic just east of 80th Street East, the CHP report states.

The collision caused Gutierrez’s Corolla to rotate clockwise into the path of a Secard Pools company truck that was headed eastbound on Avenue T, according to the CHP report.

The truck crashed into the driver’s side of Gutierrez’s car, and both vehicles ran off the road onto the south dirt shoulder, the CHP report states. 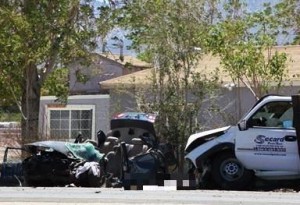 The Camry that was rear-ended in the initial collision came to rest blocking the westbound lane of Avenue T, according to the CHP report.

Gutierrez was pronounced dead at the collision scene at around 11:14 a.m., the CHP report states. His passenger, a one-year-old girl, suffered moderate injuries and was transported to Children’s Hospital in Los Angeles.

The Camry’s driver, 40-year-old Odilon Delgado Jr. of Littlerock, sustained minor injuries and was not transported.