On Saturday morning (July 27, 2013), six kids went into the Beazer Homes Royal View Estates neighborhood on Avenue L-11 and 70th Street West In Lancaster and thought it would be a good idea to go around and try to open car doors to find whatever they could get their hands on.

Little did they know they were being filmed and will soon be caught.

They got into a truck and stole approximately $50 to $80 in change and tried dozens of cars in the neighborhood.

They have stolen from other neighbors’ cars and look for stuff like cell phones, laptops, Ipods, change, backpacks, etc. – anything of value you may leave in your car. 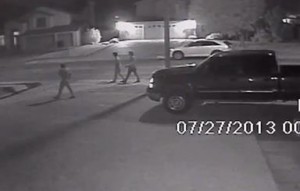 They are likely high school kids and are likely from the West Palmdale/Lancaster or Quartz Hill area.

This neighborhood, along with other surrounding neighborhoods, has been hit multiple times by this same crime, probably involving this same group.

[In the incident captured on my surveillance video], there were five guys and one girl.

[All six came together in a dark colored pickup truck], but only five left. One got into a fight with the female [as shown on the video] and hopped a wall leading into Mayflower Gardens.

They had a small animal with them that you can see in the bed of the truck, which may be a puppy and looks to be white. This dog/cat/rat may belong to the girl.

Also, the [getaway] truck looks to be a Nissan Titan extra cab with reverse swinging rear doors and sliding rear window. The truck is likely grey or red but may be darker.

Please post any info leading to these kids getting caught… Thanks for your help!

Editor’s Note: Mr. Perez turned over this neighborhood security camera footage to the Lancaster Sheriff’s Station today (July 30), and filed police number 913-13625-1182-389. Perez is anxious to bring the young thieves to justice, and says his neighborhood has been hit multiple times and his vehicle was targeted this past weekend. Anyone with information on this incident is urged to contact the Lancaster Sheriff’s Station at 661-948-8466 and reference police report number 913-13625-1182-389. Perez would like to offer a $100 reward for information leading to the arrest of the culprits. We will update this story with details on how you can go about claiming that reward.


Disclaimer: The views expressed in this article are the author’s own and do not necessarily reflect the views of The AV Times.