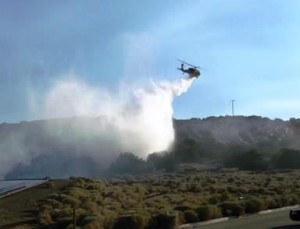 PALMDALE – A wildfire scorched between 10 to 15 acres in west Palmdale Monday evening, but was contained before it spread to any homes, authorities said.

At approximately 5:40 p.m., Palmdale deputies and fire personnel responded to the fire in the area of 25th Street West and Avenue P, according to Palmdale Community Relations deputy Jodi Wolfe.

Due to the rapid growth of the fire, emergency evacuations were initiated in the neighborhood south of Avenue P-12, between Redington Street and 20th Street West, Wolfe stated. 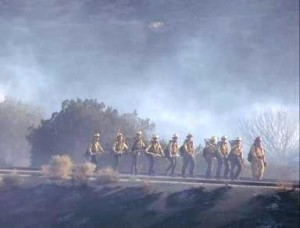 More than 100 firefighters tackled the blaze at its peak, and four helicopters made water drops throughout the fight, according Inspector Anthony Akins of the Los Angeles County Fire Department.

At approximately 6:50 p.m. Monday, the fire was contained and all residents were able to return to their homes, Wolfe stated.

The cause of the fire is still under investigation.