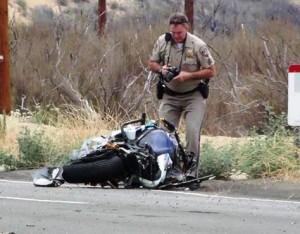 ANTELOPE VALLEY – A 35-year-old woman was killed Sunday afternoon after her motorcycle was rear ended by another motorcycle when she slowed to make a U-turn, authorities said.

Santa Maria resident Dawn Marie Downey was following her husband, Thomas Downey, and both were on separate motorcycles traveling southbound on Angeles Forest, when Thomas Downey slowed, made a U-turn onto the northbound shoulder and stopped, according to the CHP report. 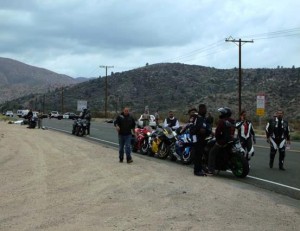 As Dawn Downey slowed her 2006 Suzuki GSXR 1000 to make the same U-turn, another motorcycle traveling “at a high rate of speed” slammed into the back of Dawn Downey’s motorcycle, the CHP report states.

Dawn Downey was thrown from her bike and suffered fatal injuries.

The second motorcycle was a 2004 Suzuki GSXR 1000 driven by 27-year-old Jorge Garcia of Long Beach, the CHP report states. Garcia was transported by ambulance to Antelope Valley Hospital with major injuries.

It was unclear from the CHP report whether the Downeys and Garcia were part of a larger group of riders. Photos from the collision scene show several motorcycles at the scene.