LANCASTER – A local family has stepped in to help a Lancaster man whose wheelchair was stolen from his property recently.

The Smith family on Thursday donated a $5,000 motorized wheelchair to amputee Bill Martin, the man whose wheelchair was stolen from right outside his Sierra Retirement Village apartment on the Fourth of July.

The wheelchair was donated on behalf of the late Beverly Smith, who had barely used the wheelchair before she passed away from kidney failure on June 21. Smith, 77, was buried this past Friday.

“That’s exactly what my mom would do,” said son Andy Smith.

“My mom is an angel, and she would be the happiest person right now in this world to know that we are doing this, because she would have done it in a heartbeat,” said Angie Smith.

Angie Smith contacted the Lancaster Sheriff’s Station this week to facilitate the donation, and she personally visited Bill Martin to give him the good news. 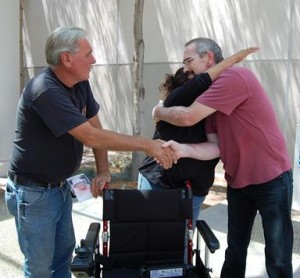 “He had a big old smile on his face, he was so happy,” Angie Smith said. “I went home and I cried, because all I remember is that smiley face and how happy he was that he’s gonna get the wheelchair.”

Thursday afternoon in front of the Lancaster Sheriff’s Station, the Smiths handed over the wheelchair to Martin’s caretaker, Robert Hukill.

“This is just a reaffirmation that we do have good people in the world, specifically in the Antelope Valley, in Lancaster,” said Lancaster Community Relations deputy Miguel T. Ruiz.

“I want everybody to know that no matter what happens in life, it can get better… there’s always an angel out there,” Angie Smith added.

The case of the stolen wheelchair remains unsolved. The blue and gray motorized wheelchair was stolen sometime between 10 and 11 p.m. on Thursday, July 4 from the Sierra Retirement Village in the 43000 Block of Sierra Highway in Lancaster. Anyone with information on this incident is encouraged to contact the Lancaster Sheriff’s Station at 661-948-8466.