LANCASTER – Five people were taken to the hospital Monday afternoon after a bus carrying Desert Haven clients was broadsided in a Lancaster intersection, eye witnesses said.

The crash happened around 3:40 p.m. on Avenue K-4 at Division Street. 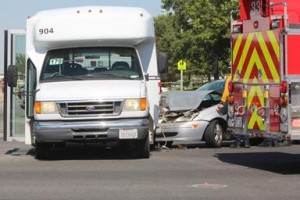 “As it [the bus] entered the intersection of K-4 and Division, I saw the little silver car attempting to stop but was unable to and hit the bus,” Bonner said.

Four Desert Haven clients complained of minor injuries and were transported by American Medical Response to Antelope Valley Hospital, according to Lorraine McKesson, one of the managers at Desert Haven.

The driver of the Ford Focus was also transported to the hospital with minor injuries. His name was not released.

Desert Haven Program Director Kathleen Miller expressed her concern about the condition of her clients stating, “I know they are physically okay… I’m more worried about their emotional state.”

Desert Haven is a local nonprofit organization that provides employment opportunities for persons with developmental disabilities.

Lancaster Sheriff’s Station traffic deputies are still investigating the collision and no arrests have been made, officials said.