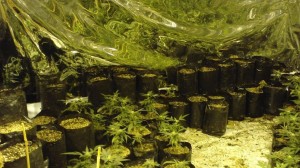 Edgar Damian, 24, and Luis Ascencion, 30, were arrested around 4:30 p.m. Monday at the alleged grow house in the 200 Block of East Avenue P-2 in Palmdale, according Sgt. Rich Peña of the Sheriff’s Headquarters Bureau. They told officials they began the operation about three months ago when they arrived from Mexico.

Palmdale Deputies were on routine patrol when they checked the license plate of a car parked at the location to determine the vehicle’s registration status. The license plate “returned” with a felony warrant for narcotics possession for suspect Edgar Damian at the same location.

Deputies summoned additional help and approached the front door to contact the occupants and search for Mr. Damian. They found the front door open and smelled the strong odor of fresh marijuana. The deputies noticed the intensity of the odor as indicative of previous “grow houses” they had encountered.

Upon the arrival of a sergeant, the deputies entered the house both to look for the warrant suspect and to secure the location.

They discovered every room in the house, including the garage, had been converted to a sophisticated indoor, hydroponic “grow” of approximately 630 marijuana plants.

They discovered the two suspects tending to plants in a rear room. Due to the noise of the ventilation equipment, they had not heard the deputies calling out as they entered and secured the location. The deputies obtained a search warrant and then continued with confiscation of the plants and growing equipment.

The plants have a potential production value of over one million dollars.

The suspect said they began the operation approximately three months ago when they arrived from Mexico. They said they had not sold any marijuana to date, but were beginning the first harvest for sale. The suspects have also been charged with theft of electricity as they had redirected the incoming power, bypassing the meter.