PALMDALE – A crowd of more than 75 family members and loved ones gathered in front of the Palmdale Sheriff’s Station Monday afternoon for a protest to bring attention to the plight of Gabriel, the 8-year-old Palmdale boy who died from child abuse.

Gabriel died this past Friday, two days after he was rushed to the hospital with a fractured skull, cracked ribs, burns and bruises throughout his body.

During an interview with detectives, Gabriel’s mother, Pearl Fernandez, admitted to being present while her boyfriend, Isauro Aguirre, abused Gabriel and caused his injuries. Mother and boyfriend were arrested Thursday and remain jailed in connection to the incident. (Read more here)

Gabriel’s death has sparked outrage throughout the community, with many residents believing the little boy could have been saved if neighbors, family members, social workers and other parties intervened.

“It could have been prevented a long long time ago. They could have removed him from the home,” said Gabriel’s teacher, Jennifer Garcia, who attended Monday’s protest.

Gabriel’s teacher said she first reported the abuse in October, when Gabriel told her that his mom used to hit him with a belt buckle until he bled. The young boy wanted to know if this was normal, his teacher said.

“All the things on him were totally visible… it was strange haircuts with scratches underneath, his ear would be bleeding, he would have what looked like cigarette burns on his face. There was a time when he told me they shot him in the face with a BB gun and he had circular bruised dots, and that was reported,” Garcia said. “I even told the social worker, ‘He’s scared to go home. He doesn’t want to report, because the more he reports, the more you go out there and then the more he gets in trouble.’”

Despite her many reports to the social worker, the abuse only got worse, Gabriel’s teacher said.

“She made him wear girls’ clothes once to school, and she said it was to embarrass him,” the teacher said. “We gave him a shirt to put over what looked like his sister’s tight little pink girl’s shirt… So it was blatant abuse that just was allowed to go on.”

He said Pearl claimed to be taking Gabriel to a barbecue, but did not bring him back. She then came by with sheriff’s deputies, who claimed that Pearl had rights to Gabriel because she was his biological mother, Robert Fernandez said.

Several neighbors reported that Gabriel was being abused in his mother’s home, but nothing was done by the Department of Children and Family Services, Robert Fernandez said.

“I’m very very angry that it had to come to this point,” he said, choking up. “It was an abuse, now it’s a homicide!”

He said he is now fighting for the rights to Gabriel’s body so that he can give his grandson a proper burial.

Cousin Emily Carranza, a Sylmar resident, said she knew nothing about the abuse until she saw it on the news.

“I never knew that Pearl had gained custody back because we did lose contact,” Carranza said. After speaking to family members, Carranza said she found out the abuse was worse than she could have ever imagined.

“The cigarette burns, the bruises, the broken ribs, the fractured skull, I was told that his teeth were knocked out,” she said. 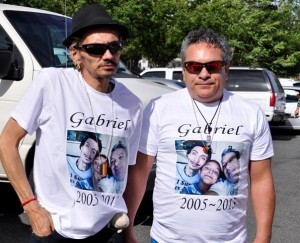 She said the family tried, but were unsuccessful in getting Gabriel placed back with his grandparents.

“They did everything that they possible could, but with an ailing grandmother, the legal system didn’t look at her as a possible candidate,” Carranza said. “Children Services and the police station should listen to grandparents when they say, ‘I suspect my daughter is abusing my grandchild.’ Don’t turn away, acknowledge it, look into it.”

“I understand that Supervisor Antonovich has called for an investigation of Child Protective Services; also, we’re investigating any prior contacts we had with the family,” Ford said. “Obviously, it’s always a tragedy when a life is taken, and we want to make sure that we didn’t miss any opportunity here that maybe could have saved him.”

“I’m going to have somebody investigate all of the prior allegations that we looked into to see if our investigations were thorough and complete and we did our jobs… If somebody messed up, they’ll have to pay the price for that,” Ford continued.

Authorities are encouraging all residents to report suspected cases of child abuse to the 24-hour child protection hotline at 1-800-540-4000. If you believe that a child is in immediate danger, you are encouraged to call 9-1-1.

Pearl Fernandez was arrested on suspicion of cruelty to a child likely to produce great bodily injury and jailed in lieu of $100,000. On Monday, her bail was increased to $1 million, according to LASD inmate records. Her boyfriend, Isauro Aguirre, was arrested on suspicion of attempted murder and jailed in lieu of $1 million bail. Additional charges are expected to be filed against the couple. Both are due in court Tuesday to face charges.

For many more pictures from the Justice for Gabriel protest, visit our facebook page.

This just in from the Los Angeles District Attorney’s Office:

“A 29-year-old mother and her 32-year-old boyfriend were charged today with one count each of capital murder following the fatal beating of the woman’s 8-year-old son, who died Friday, the District Attorney’s Office announced.

Pearl Sinthia Fernandez (dob 8-29-83) and Isauro Aguirre (dob 6-13-80) are charged in case MA059701 with one count each of murder with the special circumstance of torture, said Deputy District Attorney Alisanne Scolnik with the Antelope Valley Branch office.

Prosecutors are asking that the pair be held without bail.

On Wednesday, Los Angeles County Fire Department personnel responded to a call about 11 p.m. that a boy was not breathing in the 200 block of East Avenue Q-10, officials said. The child was taken to a hospital. He died on Friday. Investigators said he suffered multiple injuries, including a fractured skull, several broken ribs and burns.

The Los Angeles County Sheriff’s Special Victims Bureau investigated the case. Prosecutors will decided at a later date whether to seek the death penalty for each defendant.”

The couple was scheduled to be arraigned in court today (May 28), but the arraignment was postponed until June 11.

122 comments for "UPDATED: Justice for Gabriel protest, teacher speaks out"