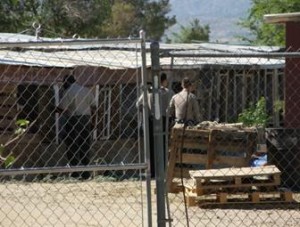 LITTLEROCK – A tip Sunday morning led sheriff’s deputies and animal control officers to a home in Littlerock where an illegal cockfight appeared to be starting, authorities said.

The bust happened shortly after 7 a.m. Sunday at 11222 East Avenue R-6 in Littlerock.

“We got a call [Sunday] of a group of male Hispanics in the backyard of this residence with a cockfighting ring and deputies responded,” said deputy Dennis Miller of the Palmdale Sheriff’s Station. “We initially found about 150 roosters with paraphernalia commonly used in a cockfighting ring.” 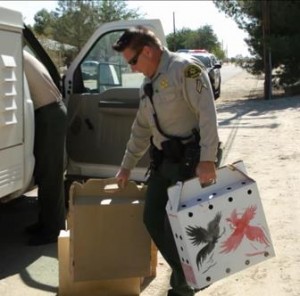 The roosters were all in cages in a makeshift shed on the property. The birds were in very good condition, according to Animal Control Officer Cornelious Chisom.

Several men were also on the property, possibly to attend a cockfight, officials said. Deputies broke up the gathering, but only the homeowner was detained, cited and then released, officials said.

About 10 of the birds were seized on Sunday, and Animal Control officers were expected to remove the remaining birds from the property today.

17 comments for "Authorities swoop in on suspected cockfighting ring"