PALMDALE – A search for two suspects accused of threatening a victim at gunpoint led Palmdale deputies to a drug bust at an Internet café Friday afternoon, authorities said.

The bust happened around 1 p.m. at Onsite Internet Services in the 300 Block of East Palmdale Boulevard according to Sgt. Zarris of the Palmdale Sheriff’s Station.

Deputies patrolling Palmdale Boulevard were flagged down by a victim who said he had been accosted and threatened at gunpoint, Zarris said.

“The suspects went inside a location on Palmdale Boulevard, which is an Internet café. Once inside the location they didn’t exit,” Zarris said. 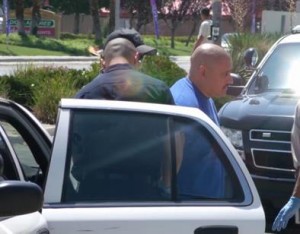 “Inside the location we found a large amount of methamphetamine, more than personal use,” Zarris said. “We also found approximately $10,000 in cash and a gambling machine… like a one-armed bandit.”

Deputies seized the items and made two arrests.

“The owner of the shop was arrested along with one of his employees,” Zarris said. “There’s further investigation going on in this case.”

Apparently the owner and the employee were the two suspects who threatened the victim. Their names were not immediately available Friday afternoon.