LANCASTER – A Lancaster resident woke up Monday morning to find a mountain lion in her front yard. Barking dogs alerted the woman to the 100-pound cougar, and the terrified woman contacted authorities.

Deputies responded to the scene and monitored the situation for safety until the California Department of Fish and Wildlife responded, Moore said.

By this time, the mountain lion had climbed into a tree in the resident’s front yard. 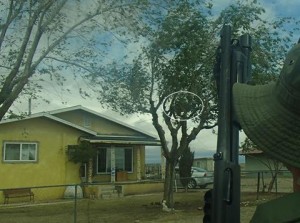 Fish and Wildlife officers darted the animal with a tranquilizer, and once subdued, the female mountain lion was taken to safety, Moore said.

“They tranquilized her and they were able to take her away and get her into a rescue, so she’s fine,” Moore said.

Mountain lions prefer deer but, if allowed, they also eat pets and livestock. In extremely rare cases, even people have fallen prey to mountain lions, according to Fish and Wildlife officials.

If you encounter a mountain lion, do not run; instead, face the animal, make noise, try to look bigger by waving your arms and throw rocks or other objects, officials warn.

More tips on handling mountain lion encounters can be found at the California Department of Fish and Wildlife’s website at http://www.dfg.ca.gov/keepmewild/lion.html.