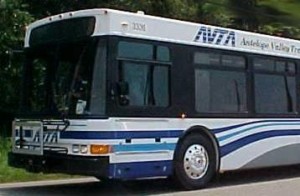 “Fare evasion is a growing problem for AVTA,” stated Executive Director Julie Austin. “If we are to meet the increasing demand for service, we must be able to count on our customers paying their share.”

According to AVTA data, ridership on local routes has increased 21% over the past 30 months, while fare revenue has declined by 2.25% over the same period.

Currently, seniors, persons with disabilities, and veterans ride free on AVTA’s local transit. Unfortunately, some passengers use reduced fare TAP cards that do not belong to them. Operators have been confiscating these cards for the past month when they discover the photo I.D. does not match the passenger. Some customers simply ignore the driver and refuse to pay or pay only a portion of the fare.

On Monday, two fare enforcement officers were brought in to work with AVTA’s transit deputy to check TAP cards and verify reduced fare eligibility. Three passengers were cited for fare evasion and face a $250 fine for failing to pay the $1.50 fare.

AVTA has been warning passengers for the past six weeks that fare enforcement efforts would increase. Signs have been placed on all the buses and at all the transfer centers warning residents they could face a stiff fine for not paying the fare.

AVTA will make no money from this fare enforcement effort and it does not set the cost of the fine.

Fare enforcement saturation patrols will continue on a regular basis.

8 comments for "AVTA to riders: ‘Pay your fair share!’"