“On Sunday, July 17, Mayor R. Rex Parris was hospitalized with COVID-19. While he is in good spirits, he would like to remind our community to continue to be vigilant and stay safe. We ask that his privacy be respected at this time,” according to a news release by the city of Lancaster.

The news release did not specify if Parris was still in the hospital as of Monday, and calls to the city of Lancaster were not immediately returned, therefore, a status update on Parris’ condition was not immediately available. It was not clear when or how Parris contracted COVID-19.

Nearly 19,000 new COVID-19 cases were confirmed Monday, July 18, in Los Angeles County, along with 29 new virus-related fatalities. According to the county Department of Public Health, 7,503 cases were confirmed Saturday, 7,403 on Sunday and 3,943 on Monday, with weekend reporting lags contributing to Monday’s relatively low total. The 18,849 combined new cases lifted the county’s cumulative total from throughout the pandemic to 3,225,697.

The actual number of infections in the county, however, is likely to be much higher thanks to the prevalence of residents using take-home COVID tests, the results of which are not generally reported to the county and added to the official total. The 29 new deaths reported from the weekend gave the county an overall virus-related death toll of 32,537. 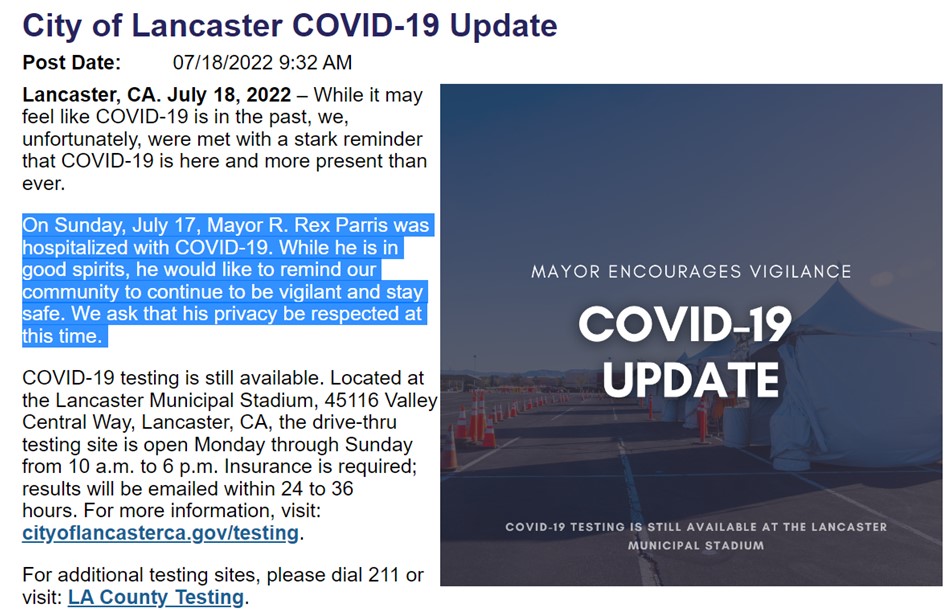