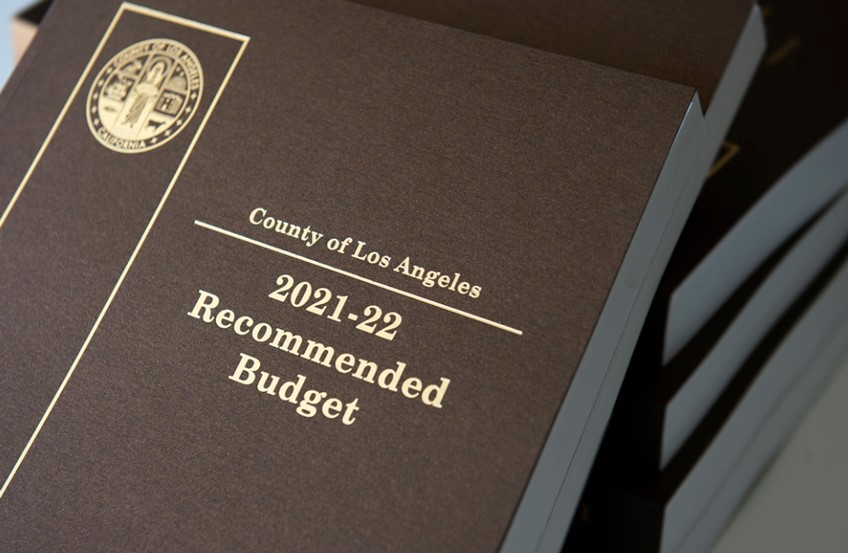 The Los Angeles County Board of Supervisors Tuesday approved an additional $2.8 billion in funding for initiatives ranging from revamping the county’s youth justice program to cracking down on illegal cannabis grows in the Antelope Valley, signing off on a final $39.3 billion budget for fiscal year 2021-22.

That total will be supplemented by another $975 million in federal stimulus funding in months to come, according to county CEO Fesia Davenport.

The budget “is a milestone of all the progress we have made … as we moved through the pandemic and toward a more just and more equitable future for all of our residents,” the CEO told the board.

Davenport and the board highlighted what they characterized as a transformative change in county spending to support a vision of “Care First, Jails Last.” A total of $461.5 million is allocated to a host of strategies intended to support that model. Yet some community advocates said not enough was being done and complained about a less than transparent process.

Community advocate Eunisses Hernandez said the CEO should not have so much power to adjust recommendations made by various advisory groups appointed by the board. Hernandez herself has contributed in various ways to the Care First, Jails Last strategies.

“This budget and these supplemental changes don’t reflect an open and transparent process,” Hernandez told the board.

Davenport countered that uncertainties about federal and state funding mean that budgeting “really is an iterative process” that is underway in her office roughly nine months out of the year.

“If there is a budget request that is not granted … in one phase of the budget, it doesn’t necessarily mean that it can’t happen,” the CEO said. “It may not necessarily be a `no,’ it may just be a `not now.”‘

Supervisor Holly Mitchell said she was committed to see even more investment in communities that have been historically disenfranchised and in growing jail diversion programs. She mentioned a recent visit to the Men’s Central Jail Inmate Reception Center.

“We’ve seen what incarcerated people and county staff are dealing with every day,” Mitchell said. “There is no doubt in my mind that we are still in a state of emergency.”

Debate over the balance between spending by the Sheriff’s and Probation departments versus community investment has intensified in recent years, with various officials promoting different visions of public safety. The five members of the county board have been largely unanimous in support of most Care First, Jails Last strategies, though Supervisor Kathryn Barger has been adamant about the need for sufficient jail beds until a working infrastructure of community alternatives has been established.

A presentation by Davenport to the board showed the Sheriff’s Department share of the budget dropping from 63% to 45% over the last 10 years, while the share allocated to treatment and services increased from 13% to 31%.

The board also lifted a hiring freeze Tuesday for all departments — other than the Sheriff’s Department and for Probation Department positions related to youthful offenders.

The budget does, however, include a plan to add 28 positions to the Probation Department, rankling criminal justice reformers.

Supervisor Sheila Kuehl pointed out that the department has a new compliance burden as it responds to a state board’s finding that the county’s two juvenile halls — Barry J. Nidorf Juvenile Hall in Sylmar and Central Juvenile Hall in Boyle Heights — are unsuitable to house young people.

Still, Kuehl said the newly authorized positions should only be filled if absolutely necessary to meet the legal mandate and no one can be reassigned

“This is no blank check,” Kuehl said. “We don’t want the department to grow its footprint.”

One LASD employee told the board that she and more than 80 other employees in her department have already been denied promotions that they worked, studied and interviewed for as a result of the freeze.

“These positions are positions that are not new … they are already budgeted,” the woman said, adding that many other jobs had been cut outright.

She was not the only county employee trying to convince the board to adjust its spending plans.

Several county physicians, whose labor union is currently in contract negotiations with representatives of the CEO’s office, said the board was turning its backs on those who were hailed as heroes during the worst of the COVID-19 pandemic.

“We carried the county through the COVID surges time and again, but when it comes to renew our contract to reflect a national inflation of 5% … we, the frontline heroes, are being asked to take a salary freeze and roll over for six months,” said Dr. Hannah Carr, a third-year resident at Harbor-UCLA Medical Center and a union delegate for Service Employees International Union, Local 721.

Carr and other doctors said the low wages would hurt the county’s ability to recruit sorely needed new physicians.

The county rarely comments on labor negotiations underway, but Mitchell and Supervisor Hilda Solis both said they or their staff had been meeting with union representatives over the last few months.

“I can appreciate that labor negotiations can be long and difficult,” Mitchell said, while Solis hoped for resolution “soon.”

One big ticket item for the board, not surprisingly, is fighting homelessness. A total of $527 million — $494 million from the Measure H quarter-cent sales tax — is slated to be spent on a mix of strategies.

“We are committing historical levels of funding to address homelessness,” Davenport told the board. “These investments will allow us to increase funding for permanent housing solutions, expand our supply of interim housing, enhance the emergency shelter system (and) bring protective services support to older adults who are homeless.”

While this is the biggest L.A. County budget in history, it leans heavily on one-time federal and state funding provided in response to the pandemic. Still, the strength of the county’s financial position is underscored by last week’s decision by rating agency Standard and Poor’s to move the outlook on its highest possible AAA bond rating to “stable” from “negative.”