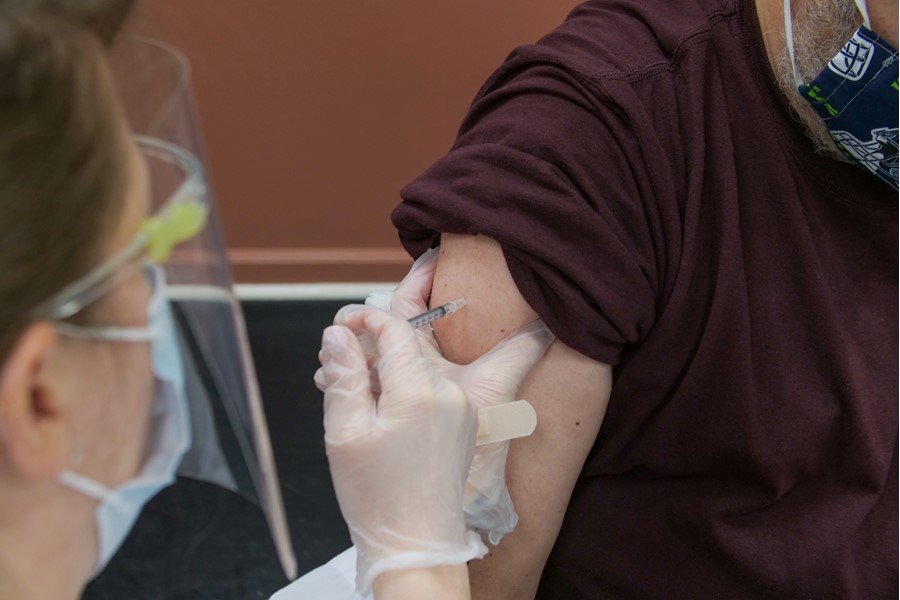 Despite what has been a persistent downward trend in COVID-19 case numbers and statistics, there is still more work to be done to get the pandemic under control, and residents shouldn’t let up infection-control measures, a county health official said Friday.

Dr. Paul Simon, chief science officer with the Department of Public Health, also said the appearance of various variants of the virus that causes COVID-19 is not surprising and should not spark panic.

“This is an RNA virus, and we know that RNA viruses, when they replicate, the genetic material makes lots of mistakes, or mutations,” he said. “Most of those mutations are completely insignificant. … But every once in a while there’s one or several mutations that we become more concerned about that seem to potentially at least influence the behavior of the virus. So the virus can become more transmissible or the virus can become more virulent, more likely to cause more severe disease, or of great concern, it might be more resistant to the vaccines.

“So that’s a concern, but I don’t think at this point there’s any need for panic,” he said. “I think what we are seeing is that the vaccines that have been authorized … seem to in some cases be less effective with some of the variants, but nonetheless still seem to be pretty effective.”

As of this week, a total of 18 cases of a coronavirus variant first detected in the United Kingdom have been found in Los Angeles County, but there haven’t been any cases of a variant found in South Africa. A variant that emerged in California last summer appears to have become dominant in much of the state.

But all major metrics continue to trend downward in the county. Simon said the rate of decline has slowed slightly, “but in my mind that’s not surprising given that we’re getting to lower numbers.”

He stressed, however, that the numbers still aren’t low enough to suggest that people can go back to normalcy.

“We’re still seeing 1,500 to 2,000 cases a day,” he said. “That indicates a pretty significant level of ongoing community spread of the virus, so that’s unfortunate.”

He noted that hospitalizations “have come way down quickly and continue to come down.” State figures on Friday showed 1,733 people hospitalized due to COVID-19 in the county, with 550 in intensive care. That’s well below the peak of more than 8,000 patients in early January.

“We continue to see quite a high number of deaths, very tragically,” Simon said. “I think most days here over the past week it’s been over 100 deaths per day, much below what we were seeing, again, … in the surge when we were seeing 200 to 300 deaths a day. But the more sustained higher number of deaths, again, is not surprising, given the magnitude of the surge and the fact that it sometimes takes considerable time to progress from infection to more severe illness and then to ultimately passing away.”

The county reported another 144 COVID-19 deaths on Friday, while Long Beach health officials announced three more and Pasadena added two. Since the pandemic began, 21,246 COVID deaths have been confirmed countywide.

Another 1,838 cases were confirmed by the county, with Long Beach adding 103 and Pasadena reporting 28. The new cases increased the cumulative total from throughout the pandemic to 1,189,363.