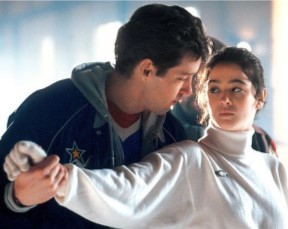 PALMDALE – The Palmdale City Library will host a showing of The Cutting Edge this Wednesday as part of its Mid-Week Movie program.

The movie will start at 5:30 p.m. this Wednesday, March 28, at the Library, located at 700 East Palmdale Boulevard. Admission and popcorn are free.

Starring D.B. Sweeney and Moira Kelly, The Cutting Edge, (1992) rated PG-13, is the story of temperamental figure skating whiz Kate Moseley who is denied a gold medal at the 1988 Olympics after a fall. As Kate drives off partner after partner, her coach must quickly find her a new one in order to be ready for the next Olympics. Enter arrogant former Olympic hockey player Doug Dorsey, who briefly encountered Kate years before. Reluctantly teaming up, Kate and Doug’s icy rapport begins to thaw, resulting in a chemistry both in and out of the rink.