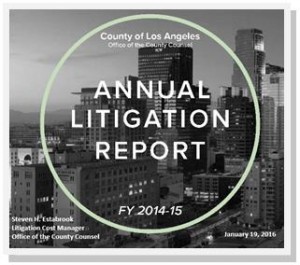 LOS ANGELES –  Los Angeles County’s litigation expenses for fiscal year 2014-15 were $118.9 million, up 24 percent from the $95.6 million spent in fiscal year 2013-14, according to the County Counsel’s Annual Litigation Cost Report. View it here.

The county paid out $59 million in 2014-15 to cover its attorneys’ fees and costs — almost as much as the $59.9 million it paid in settlements and judgments to residents alleging excessive force by sheriff’s deputies, medical malpractice at county hospitals, employment discrimination and other wrongdoing.

Of the 25 cases that went to trial, county attorneys won 64 percent of the time. But the vast majority of county claims settled out of court, with attorneys typically citing the risks and uncertainties of litigation.

Attorneys recommended payments to settle 233 cases and cleared 169 others without any payment to the claimants, according to Litigation Cost Manager Steven Estabrook.

The Sheriff’s Department alone keeps plenty of lawyers busy, accounting for half of all 2014-15 litigation costs.

Of all costs, “none rose as much as excessive force,” Estabrook told the Board of Supervisors Tuesday.

The number of excessive force cases filed against the LASD has dropped by 20 percent over the last two years, though claims overall went up last year, the litigation manager said.

Supervisor Hilda Solis urged everyone to keep their eye on the problem.

“We’re going in a better direction, but we need to continue to have our foot on the pedal,” Solis said.

The Department of Health Services ranks second among county departments in total litigation costs, with $19 million in payouts and attorneys’ fees and costs. That’s more than double any department other than LASD.